The Limits of Control (2009) Directed by Jim Jarmusch 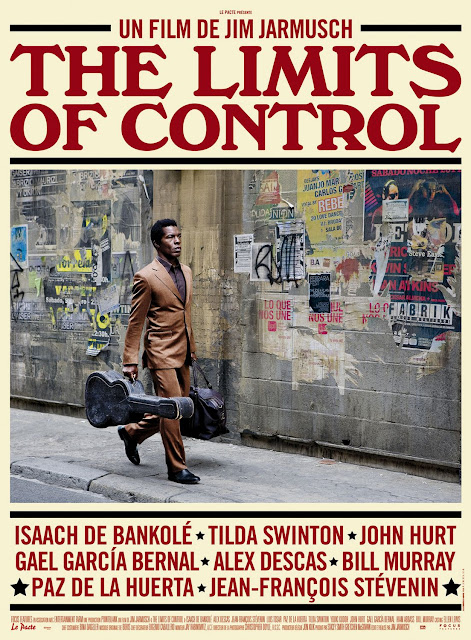 Astrid:
Our household has a lot less time to watch movies these days and unfortunately, there will not be any change in the situation any time soon. Therefore it was especially annoying that when we finally had time and space to share a film together, we picked something like The Limits of Control. Our intention was to watch something entertaining and good. In the shop Jim Jarmusch seemed like a quite safe bet for the both of us – and the guitar case a suited man is holding on the cover of the DVD, seemed like a promise to me.

The Limits of Control is extremely slow. It is also abstract, only occasionally attached to plot development, certain time and space. After half an hour we are ready to fall asleep. Aesthetically things are pleasing, but I cannot be cheated into thinking that I could figure something out here. Everything just IS. But we persist because we cannot begin a new habit of starting films and then never finishing them (this has happened a little recently and it's not good for blogging).

Half way through the film we have started to argue about where in Spain the film is located after each train ride. It's become more interesting to look for location clues and talk over the film than to concentrate on the protagonist's repetition of routines. I have never been to Spain and Nick has only visited Valencia some 20 years ago, so this made for a passionately ignorant argument. In the end I felt I had witnessed something that passed me by because the timing of the film and my personal timing was totally off. I don't want to say the film was bad, although I cannot recommend it either. Hopefully next time, Jarmusch will revisit his sense of humor.

Nick:
We all want more from our culture. We want it to move us, make us think, transport us to new areas mentally and even physically. The need to experiment is essential in creating new experiences. But what happens when someone you admire, who's known for pushing the boundaries ends up losing the plot? Jim Jarmusch has taken risks before and come out on top or, at the very least, engaged us. The Limits Of Control however tests one's patience.

Where to start? Repetition when used to create a riff of images can be startling. In The Limits Of Control the repetitive use of image following the main protagonist, Lone Man ( Isaach De Bankolé) easily drifts into tedium. Sitting at a cafe drinking his espresso in two cups, the use of the matchbox with a secret message, his continual Tai Chi exercising in hotel rooms or the Lone Man's visit to the art gallery begin to grate when viewed with no context or meaning. Jarmusch would like to think he's deconstructing the gangster film, a post-modern hit movie with echoes of Jean-Pierre Melville. Unfortunately, the script brings a new level of pretension. When anyone does speak, it's Jarmusch's own thoughts rapping on movies or art or lame humor, usually delivered by the starry extras, who include Tilda Swinton, John Hurt, Gael Garcia Bernal and Bill Murray.

What almost saves the day is the look of the film (shot by the ever reliable Christopher Doyle), coupled with the musical atmospherics of Japanese band Boris. This, sadly is not enough to salvage The Limits of Control from being terrible. The Limits Of Control could easily have been the existential thriller Jarmusch obviously thought he was making. But you need to create on-screen tension, character, context and meaning for that to work. The Limits Of Control tested my limits to stay awake all the way through. 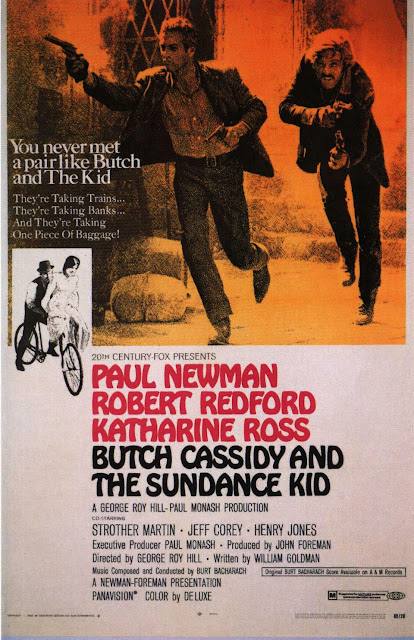 Nick:
The concept of celebrity has been with us a long time. It may take different forms or shapes, some celebrities may be real or imagined. Celebrity goes hand in hand with myth making. Despite constant changes in fashion and thinking, celebrity still obsesses us. In Forbes' recent list of top earning film actors, the list displays that it's your fame/connection with the public that puts bums on seats more than your acting talent. But in many ways, it has always been like this. Hollywood has always worked on this type of demand quota. It's amazing that in 2011 we still buy into this shallow process. Butch Cassidy and the Sundance Kid then, is a star vehicle from the old days. If they had cast the movie today (or remake it, though an improbable sequel is being made!), it would be Leonardo DiCaprio teaming up with the slightly older Johnny Depp, the love interest being supplied by Anne Hathaway (if she's not too tall for those guys!)

This brings us back to celebrity. The reason we entertain a picture like Butch Cassidy and the Sundance Kid in the first place is the pairing of Paul Newman and Robert Redford. The chemistry and play between the two 'sexy' superstars (this was a fledgling pairing of superstars for Hollywood) is so easy on the eye, so effortless, so witty yet honest, it's pure entertainment. It saves this endeavor and makes you want to return again and again to the film (as I have done over the years). Actually, in many ways I love this film, even though I'm also secretly repulsed by it. Far greater than the very contrite and contrived pairing of Newman and Redford in The Sting,  Butch Cassidy and the Sundance Kid is some kind of classic. Yet the picture itself has a moralistic view towards robbery and outlaws, that ultimately, the picture is against its own heroes. This is a republican Western in many ways. One that lulls you in. It fooled its left-leaning stars of the day too.

Astrid:
As you may have guessed already, Paul Newman and Robert Redford are eye-candy for me. That's why I suggested we revisit this film. I like their suits and hats. 1969 was still a good year for suits and hats. Then there's the silly and quite unnecessary scene with Newman and Katherine Ross on a bicycle together, which was the other reason I wanted to see the film again. Somehow the innocent and ridiculous morning ride (accompanied by Bacharach's jolly song) had become very meaningful in my memory. On a second look the scene was so unrelated to the rest of the film that it was hardly the right reason to watch it again.

The rest of the film then: Well, there is a lot of horseback riding, getting away from the chasing parties and then running away some more. Oh yes, and robbing trains and banks (in a Hollywood way where everything is too easy and showman-like). Everything takes place in a great scenery and varying degrees of natural light and is filmed with gritty and often unfocused lens, which is refreshing after watching today's super clarity and CGI. The plot is just a bit boring for my hunger for intelligence, psychological complexity, or something else to throw me out of being sure of what's going to happen next.

Sundance Kid (Redford) has a girlfriend (Ross), but the relationship between the girlfriend and Butch Cassidy (Newman) seems almost hotter in the film. There is a feeling all along that she is being shared by both of them – just like the two buddies share everything else... I would have been interested in seeing a bit more than a suggestion to this direction. In fact there is a part in the middle of the film that describes the threesome's travels from the Wild West via New York to Bolivia and from the pretended home camera footage they could have made a whole different movie about the three-way love Butch, Sundance and the woman (whose name was not repeated enough for me to remember it) had. But somehow the director was more interested in gun fighting scenes and endless horse riding. That's where Butch Cassidy and the Sundance Kid lost me.
at 10:31 AM