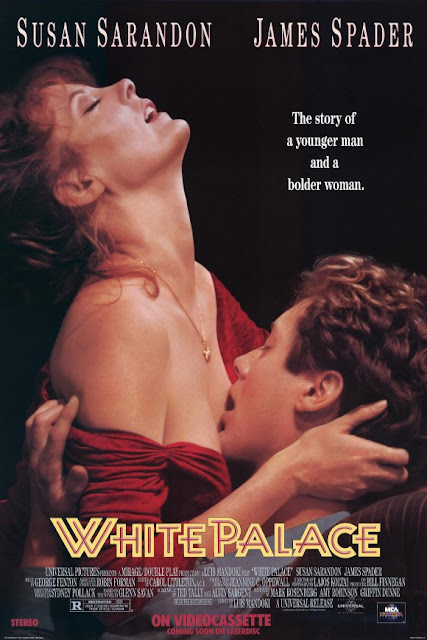 Nick:
Hey, wake up! It's been a bit sleepy here I know, but work commitments for me (i.e. mixing an album) usually mean I'm not home watching movies. I must add at this point that having been in a virtually sealed audio environment for a number of days in a row plays havoc with your social activities, even your nearest and dearest may suffer. It takes a few days to acclimatize back to a different version of relative normality. So, the day after a per-usual, intense studio session, me and Astrid arrive in downtown Helsinki. We couldn't find anything interesting enough on at the local picture palace, so a hastily chosen DVD will suffice. I remember being fond of White Palace at the time of release. Well acted, smart and little bit rougher round the edges than your usual romantic movie.

After some 20 years since I last saw White Palace, time has bought mixed feelings from me towards the film. Yes, Susan Sarandon is still excellent here. This was a time when Sarandon would willingly disrobe in any old art house movie (The Hunger, Atlantic City) and as well as the acting chops, she still has it here in other ways too. Yes, she's very sexy. James Spader, hot young thing that he is at this time, has not quite reached his height of robotic conformity that he would later go onto display in other movies (with chilling effect in Crash). He has empathy here, and the chemistry between Sarandon's older waitress and Spader's younger, wizard copy-writer still resonates. So, the romance and unlikelihood of it, still works for White Palace.

It's when the picture tries to discuss class values and differences in social background that it falls down. Cliché after cliché is wheeled out about Spaders possible embarrassment at being seen with an older and poorer woman. What becomes quickly apparent at a party scene in the picture where Spader takes Sarandon along, is that Sarandon oozes a sex appeal that many men would fall for, weather he be a rich frat boy or Hollywood superstar. The other women vying for Spader's attention don't stand a chance. It takes some of the gloss away from an otherwise intense romance which occasionally and skillfully deals with  the loss of loved ones. White Palace (named after the Burger joint Sarandon works at) remains still, just about open for business.

Astrid:
Choosing an anniversary movie to watch is a big deal if you think that the choice somehow reflects the state of affairs in the relationship. We had our anniversary yesterday. At first, we were going to see a movie in town, but a few facts worked against us: Mainly, there was nothing suitable on in the theaters in Helsinki. The couple of films we could have seen (Midnight In Paris and Tree of Life) started at nine in the evening and I was not up for waiting that many hours after dinner. Also, at this stage of pregnancy we need to practically always remain within a few feet from a toilet, so a cinema might have been impossible anyway. Not a surprise then that our anniversary date started with picking a DVD for later.

For some reason it seemed we were both on the look-out for a romantic film, or at least one about a relationship. I was very keen on Blue Valentine, although I remember reading that it's quite sad while romantic. I was told it was too expensive right now and we would have to wait for the price to come down. Nick then suggested numerous old classics with beautiful stylish old-fashioned movie posters on their covers. He also attempted to get me to go for My Beautiful Laundrette, but although I love Daniel Day-Lewis, I was not ready to identify myself as him that evening. I much rather identified with Susan Sarandon.

So we ended up going home with White Palace. Simple enough, I was Susan and Nick was James Spader. They fall in love against all obstacles, not everybody approves, but they have fun and then they really get serious – easy enough to identify with in our circumstance. An added aspect of comparison was that the couple in the film had a pretty big age gap between them, although in their version the woman was the older one. White Palace was really an entertaining film wrapped up in the tangles of this one chance encounter turned into a love story. It had an awful soundtrack, a dated look and it wasn't really anything that special as a film. Yet, I'm sure it was a perfect choice for the occasion. At this point in our relationship, I am sure we too have that dated look from time to time. But the soundtrack is always excellent in this relationship.
at 8:04 AM