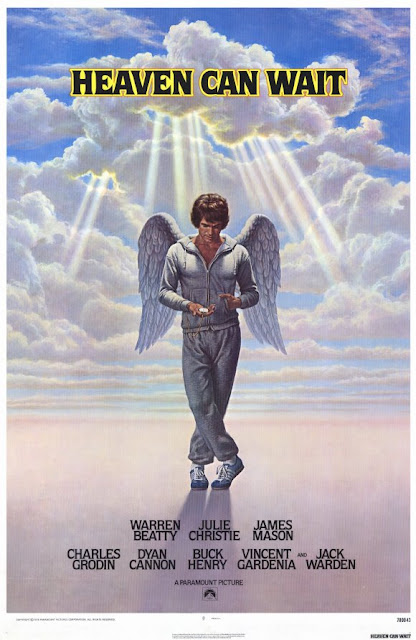 Astrid:
Ok, yes, there is a Warren Beatty fixation in our house. And a Julie Christie obsession too. Heaven Can Wait is a double-fix for desperate addicts. Compared to the true greatness which these actors are capable of creating, this film isn't strong, but it is heartfelt in a fluffy comforting way.

The 1980's was just around the corner when Heaven Can Wait was made. The hair, the training outfits, cars, and the ways of the nouveau riche all scream with terrible will to consume and celebrate the shades of brown. But I have no interest in American football (it looks like idiots bumping into each other for no reason and throwing a weird ball in frustrated desperation). I have no interest in rich men in polo outfits (they just look like idiots). In fact, I should not be interested in the characters of this film at all. But before the characters there is the thematic content: death.

Death is endlessly interesting in its obvious all-expanding and all-devouring crude manner. In Heaven Can Wait death is broken down into a journey of reason. There is a possibility of  angelic error, of being taken away too soon. Luckily, humans are essentially souls who can therefore be put into someone else's body after they have died. According to this view there is a master plan, there is an expiration date hovering above our heads and, yes, there is heavenly justice. For romantic purposes: the soul shines through the eyes; recognizable even in a different body.

I am not being sarcastic when I say that I want to believe that death really is fair like this. And that we all live for the duration of time that is celestially picked for us. I want to believe in faith because then I do not have to feel so insignificant and helpless. Then my view of the planet would not have to be a perspective on the biggest injustice ever.

Thank you Warren for the moments of simple hopefulness and lightness. I don't even mind it that your vanity compromises the viewer's chance to really experience what it feels like to suddenly be looking at a different person but imagine that it is your soul still inside. Wouldn't we all be rather looking at Warren than some no-name playing the rich guy in his polo suit?

Nick :
The idea that there are guardian angels looking over us has been used in cinema on various occasions. Most notably in Frank Capra's It's A Wonderful Life and in Powell & Pressburger's A Matter Of Life & Death. Heaven Can Wait is already a remake of Here Comes Mr. Jordan from 1941. I've watched Heaven Can Wait quite a few times over the years, and I think it's an underrated picture. It always makes me wonder why the angels looking after us don't get involved in day to day life, why only when it's a matter of death? Maybe I need to start believing in god. 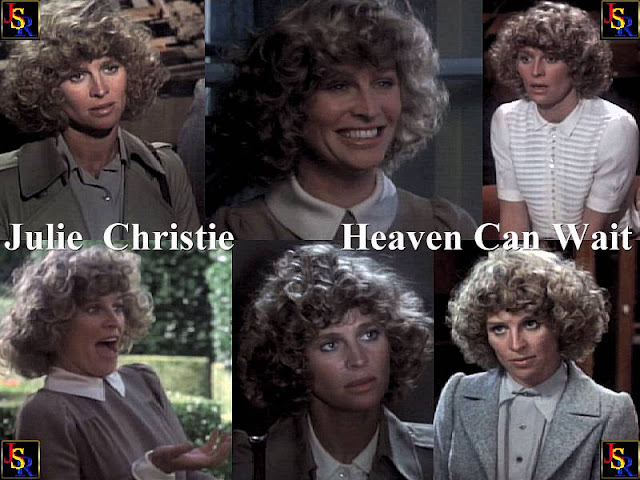 Guardian angels don't make our own luck, and whoever was designing costumes and the hairdresser for Julie Christie in Heaven Can Wait, certainly won't be going to heaven. They'll be going to the fashion crimes tribunal. Will there be a guardian angel saving them from extermination? You can also wager that Dyan Cannon & Charles Grodin won't be being saved anytime soon after their over the top, almost slapstick turns here. Is there any guardian angel out there that can deal with Beatty's ego?

As it turn's out Heaven Can Wait is still a top class comedy. There are fine performances from James Mason and Jack Warden,  and some moments of gravitas between the smart ass humor. It's the dying days of New Hollywood, but the aesthetics and attitude of that movement still shine through Heaven Can Wait. The final exchange between Beatty and Christie is full of suspense, mystery and chemistry. It's a wonderful cinema moment. The rest of the film doesn't live up to that feeling, but it's a fun ride getting there none the less.
at 8:31 AM 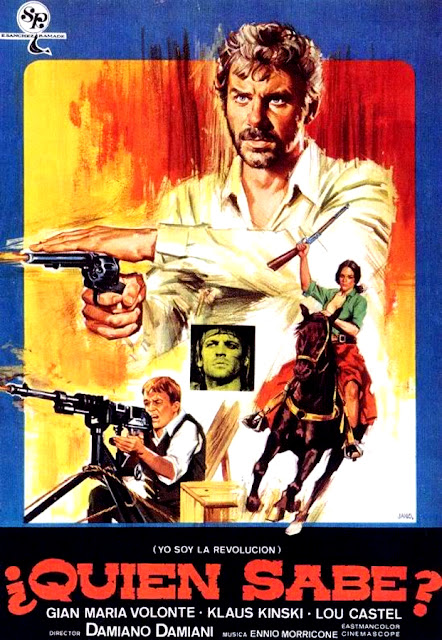 Astrid:
It's nice to get presents that reflect the receiver and their state of being. It says plenty of good things about the giver, like that she is in tune with the person getting the gift. I gave Nick a box of rare Spaghetti Westerns for Christmas, because he always cries watching them... and because he asked for the box. OK, sometimes it's annoying how exactly he knows what he would like for a present. He doesn't go for the element of surprise, yet, he always thinks he knows what I want without asking me!

Anyway, I extended my niceness to include sitting through one of the films. Nick chose Quien Sabe? because it was supposedly less violent than the others in the box. The movie, like most of this genre I've seen, looked very good. It was a pleasure to watch just for the detail in costumes and the camera work. The story itself was pretty simple and offered no surprises or really deep thoughts or even great lines. Gian Maria Volonte played the leading Mexican outlaw whom Lou Castel's character came down to exploit in order to kill the leader of the revolution. A kind of loving relationship forms quickly between these two characters – the savage and the noble man – sort of a classic from Italian gay porn.

When Nick watches these films, he is right at home. He even looks a little like the characters onscreen when I gaze at his direction during an extra violent scene. He morphs into the action and his emotions are illustrated by the Morricone (was it really?) soundtrack. That's how much he is a Spaghetti-Western-kind-of-guy. Despite some effort, I'll never be a true fan of this genre. I have developed a respect for some aspects and enough knowledge to contextualize the genre in cinema history, but I have not found the pleasure of submission here.
Nick:
It's always galling when having to tell someone what you would like for a gift. I always come across as some adolescent with Tourette's.  I was hoping for Judge Dredd Complete Case Files no.12, the first volume of the Mega City law enforcer's complete 2000AD adventures in full color. I was also interested in revisiting the Mad Max series in one handy box set. Atlas Sound's latest album on vinyl was a wish. I also had the Cult Spaghetti Westerns DVD box set on my list. Three gems from the genre (Quien Sabe?, Keoma, Django) I remember viewing many years ago when they first aired on BBC 2's  Moviedrome series, introduced by British film Director (and Spaghetti Western nut) Alex Cox. Well, I'm guessing you already realized what I unwrapped.

Quien Sabe? (known in English as A Bullet For the General) is a certain strain of Spaghetti Western from the mid 1960's which has a definite political bent. A few other pictures have delved into this area in the Western genre, Sam Peckinpah with The Wild Bunch and Sergio Leone with Duck, You Sucker! I think both are far superior to Quien Sabe? in that they have more depth, are better acted and have sharper, less cliched scripts. Still, Quien Sabe? came first and has a visceral energy that the other two pictures never match. Although Leone's influence looms large over Quien Sabe? especially as regards the look, and the sound (the music was supervised by Ennio Morricone). The influence is no more apparent than the casting of the amazing Gian Maria Volonté. Volonté cut his spurs on the first two parts of the Leone Dollars trilogy.

Volonté plays Chucho, a mercenary whose main purpose is to steal arms and sell them to the leader of the Mexican Revolution. On the way his gang (including Klaus Kinski as his overtly religious brother El Santo) recruit American Bill Tate (whom the gang refer to as Nino). Unbeknown to Chucho and his gang is Tate's intention, as paid for by the Mexican government, to assassinate the leader of the  revolutionaries. In some ways, Quien Sabe? is a rite of passage tale of how Chucho becomes a revolutionary and rejects the lure of the capitalist dollar. Along the way, director Damiani displays a serious style in framing, costume and set pieces. Quien Sabe? is one cool looking movie. That it raises political and personal ideals along the way and has such style while doing so, I can only recommend Quien Sabe? Then again, I'm a soft touch when it comes to this kind of movie.
at 8:31 AM