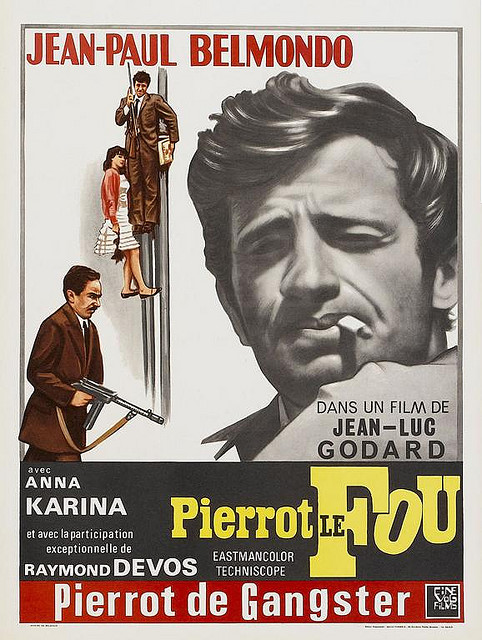 Astrid:
As I have stated before in this blog, Jean-Paul Belmondo, Anna Karina and Jean-Luc Godard have an almost holy place in my cinematic heart. To see and experience life as Pierrot Le Fou is to really live – or so I have thought. That's been the innocent child-like view of mine. Cynically speaking, Godard's films from this period offer a vast visual resource pool for any young blogger wanting to tap into effortless cool. His films also offer an air of intellectualism, name dropping and they mix fairytale with essaying about art. This complexity is second nature to Godard. Who cares if anyone can follow a plot from beginning to end in some coherent linear way, at least you can congratulate yourself for recognizing at least ten names of film makers, philosophers and poets mentioned in any given Godard movie...

The reason why none of the snobbism gets to me in Pierrot Le Fou is Anna Karina with Jean-Paul Belmondo. Their acting looks like the most fun kind of playing, spontaneous and unexpected. Not only do they look amazing in their clothes and without their clothes, they have a sense of humor about themselves. Nothing is too serious. Not even this movie. This time around I didn't really care much for the plot of this film. I was bothering to try and understand what motivated the two characters, but did not come up with anything rewarding in the end. In my mind I had also mixed up a couple of other Godard films with this one and created my own story thus looking for scenes in Pierrot Le Fou that never take place.

A suspicion smoulders in my mind that maybe Godard is somewhat resentful towards his always stunning leading ladies. He seems to portray these women as cunning, deceitful, confusing, mysterious and deathly. It is always the women who drive the men to trouble bigger than they can cope with. And it is the women who stop loving the men first. Godard's attitude to women as dubious femme fatales is something I've never thought of before and now that I have started, this idea disturbs me a little.
Ultimately, I would like to remain a woman who can watch Pierrot Le Fou without too much analyzing, just for its visual impact and occasional emotional reward too.

Nick:
In the annals of looking cool with a cigarette dangling from between your lips, there have been many wannabe champions of the art. In popular song, David Bowie, Bryan Ferry and Serge Gainsbourg have all tried to master this pose. Humphrey Bogart & Elliott Gould as a certain dick called Marlowe have improved the pose compared to their rockstar counterparts. Many others have tried this look, but the undisputed king is Jean-Paul Belmondo. Just watching the fat Gauloises hang from those luscious lips is enough to make you wanna strike one up. Yummy. Sexual. It's a shame I dont do that anymore. 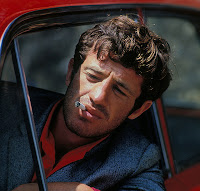 Godard understands the power of "Chercher La Femme" and in Pierrot le Fou he realizes that Belmondo's love for Marianne Renoir (Anna Karina) like his own love for Karina is doomed. It's all over Pierrot le Fou and in the subsequent movies he directed Karina in. He's telling us you can dream about someone like that but you'll never have someone like that. Belmondo as Ferdinand, Pierrot or himself is as cool as screen males ever have been or ever will be. But he's no match for Karina. Pierrot le Fou has more ideas in it than most of popular culture combined and then some. It's still radical, sexy and pretentious. But as it gets older, Pierrot le Fou starts to resemble something even more classic in cinema. The look is spectacular in an oddly conventional way. The use of color and the cut-up soundtrack somehow recall a vintage quality.

If I were to compare this to an album I'd say it's a White Light/ White Heat or a Before Hollywood. Does that enlighten you much? A Scott 4 or New York Tendaberry perhaps? Can I make this easier for you? In these postmodern times I can suggest A River Ain't Too Much To Love or Wu-Tang Forever? Pierrot le Fou is not like these albums at all in any way. The film just leaves me with the same feeling, that's all. I'm just trying to say you should see this if you have not. Life's too short and Pierrot le Fou is one of its pleasures.
at 12:39 AM 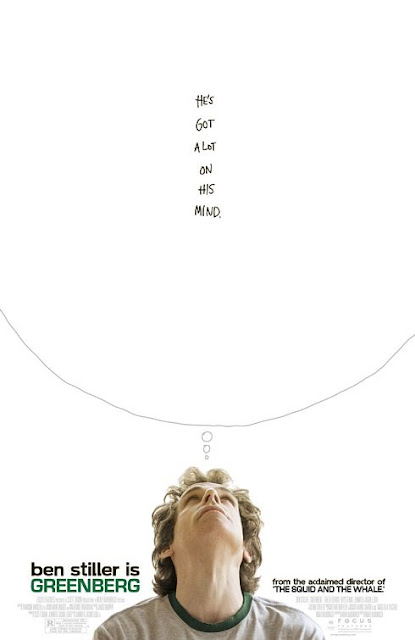 Nick:
I was in a band once that was signed to a major record label (actually, it's something that has happened to me a couple of times in my life). On this occasion it ended in tears when the promise of something better from the label led to compromise on my part against the wishes of my band members. I lost my band (I left) directly as a consequence of said compromise (the recording of two songs). I learnt many things from this experience. Trust your band members. I'm still not sure they were right, or that I agreed with their view on the songs. Compromise and the possibility of something immaterial are no substitute for the binds that tie. Friendships were damaged (I'd like to think not permanently) and a few years' work was wasted. This was the only way possible for me to relate the character Ben Stiller plays in Greenberg.

As the Greenberg of the title, Stiller gives a note perfect performance as a former musician turned carpenter, suffering from depression in a shallow-peopled LA. Self-absorbed, narcissistic, vain, humorless and selfish Greenberg has gone through life thinking his own way is the only way. Away from his native NewYork and house sitting for his brother in LA, Greenberg tries to re-connect with his former friends (an excellent Rhys Ifans and Jennifer Jason Leigh). In doing so he reluctantly falls for his brother's personal assistant, the equally lost, low on self-esteem Florence (Greta Gerwig).

After a whole stream of very uncomfortable scenes, Greenberg finally offers us some redemption in the promise of love fulfilled. Baumbach handles Greenberg with an uneasy mix of comedy, seriousness and then ultimately embarrassment. A sharp, dryly witty script helps, as does James Murphy's unobtrusive soundtrack. But Stiller dominates. An awkward yet enjoyable romp.

Astrid:
I think I need to watch this film again in about six months, because I know I missed some things this time around that I would usually really appreciate. As I was watching Greenberg I was sitting on a birthing ball (a normal gym ball actually) trying quite desperately to get comfortable and failing all the time. This personal difficulty made me not focus perfectly and it added a touch too much un-comfortability to an already uncomfortable film.

The film's sense of discomfort was of course intentional and well-established. Ben Stiller's character Roger Greenberg was returning to LA from a period of hospitalization due to serious depression. He landed somewhere between what he knew of his old life and what he was about do discover. He seemed to be suffering from a catharsis of sorts – a change was taking place. A kind of mirror image of himself was reflected on the young assistant Florence (played by Greta Gerwig), who was equally lost in life, but much younger and a woman. This film played with a very genuine feeling of awkwardness all the way through, its events and shifts in characters and plot were subtle and therefore believable. Something kept me at a distance though, which might be my own fault, I know.

There was a great scene between Roger and his good friend Ivan (Rhys Ifans) where they finally told each other how they felt and had been effected by the end of their band together about a decade earlier. I have never seen a scene in a movie getting so deep into how meaningful it can be for a person to have a band (even an unsuccessful and unknown one). Those relationships are immense and what happens between the people and to the dreams the members have is crucial in life. Bands are life. There, that was a nice acknowledgement from a film.
at 9:58 AM