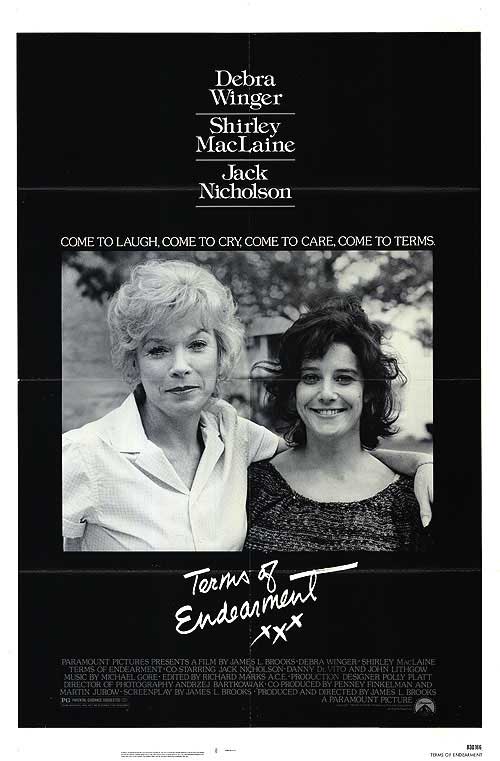 Nick:
I get it sometimes when extremely tired, also when mentally and emotionally hurt. If I bang my little toe on the sideboard, I get it too. What is it I get? I get a handful of hankies/tissue papers and ultimately a flood of tears. Yes, I get tearful. I cry watching movies (I'm sure I've mentioned this here before?) King Kong does it for me every time (strangely the 1970's remake!?) And some other pictures like say, Casablanca or the Clint Eastwood/Meryl Streep definition of the modern weepie, The Bridges Of Madison County. Terms Of Endearment is a terrible film. There is no way for me to avoid making that statement. It's smug and self-satisfied and has the worst chirpy-fucking-chirp soundtrack. Add this to shallow characterization in a film that thinks it's dealing with real issues. Yet, this film makes me blub like a baby every time. Why?

Hateful mum (Shirley MaClaine, sister of Warren) resents getting old, treats grown-up daughter (Debra Winger) terribly. Mother does not agree with her daughter's pending wedding to Stephen Malkmus clone Flap (Jeff Daniels). After the marriage a few years whiz by. Daughter has children all the time whilst husband moves family around America, accepting teaching jobs and having affairs with students. Daughter has affair with ugly bank manager and is diagnosed with cancer. Lots of guilt ensues. Daughter dies. Crying starts. This is basically the plot of Terms Of Endearment. I forgot to mention that MacLaine is excellent and that Jack Nicholson as a boozy womanizing astronaut steals the film. In fact the hateful mother and the crazy astronaut scenes elevate Terms Of Endearment momentarily to greatness. Unfortunately, the movie focuses too much on the duller-than-life daughter's story.

Despite my boredom with this twee Americana and the essentially slavish mentality of the do-gooding Winger character, once she's on her death bed, being so brave and the big C is coming to get her and she says goodbye to her kids and her husbands a shit, the hateful mum keeps the children once she's gone, all this emotion just does me in, it's too much for me ...boo hoo hoo.......  So, I say it again. Terms Of Endearment is a terrible film. One that brings the tears out in me and I don't know why (or maybe I'm being coy?).

Astrid:
Terms of Endearment is a film I cannot discuss without acknowledging that I took it very personally indeed. I (along with a surprisingly big number of my close friends) am currently expecting a baby. Needless to say, at this point this fact influences my perspective on almost anything I experience. Yet,  because Terms of Endearment is largely about a mother-daughter relationship once the daughter has started her own family, I watched it especially closely with mother-to-be spectacles on.

The movie portrays a mother (MacLaine) who has difficulty letting go of her daughter and accepting and supporting her in her independent choices. In fact, the mother has obviously always been using the daughter for her emotional needs rather than offering her own shoulder of support for her growing child. That becomes clear from the beginning of the film. The mother does not approve of the daughter's (Winger) hair, girlfriend, husband, or any choices for that matter. The film offers no explanation as to why these people have turned out the way they are. The mother is rich and the daughter ends up poor and uneducated with three children and a philandering looser husband. The mother finally breaks her years of loneliness by starting an affair with her neighbor, an alcoholic astronaut (Nicholson). All the while the mother keeps herself suffocatingly close to the daughter by phoning her up everyday, all day long. I'm not sure if the film is aware of its portrayal of co-dependency, but that's what it certainly depicts.

Terms of Endearment is infuriatingly flawed. It creates very flawed characters and leaves the viewer wondering if this is entirely intentional or not. Maybe it's a good thing that I never know what the film wants me to feel about anything – there is a callousness of the characters which remains in complete juxtaposition with the sentimental and therefore intrusive music. Finally, the ending of the film is entirely unsatisfactory. Despite all these things, in my current state of metamorphosis and becoming, I enjoyed the movie because it allowed me to reflect on my own dreams of mothering and my own experiences as somebody's child. Terms of Endearment was made in 1983. Unfortunately, I'm afraid there is nothing out there being made now that could speak even this honestly of such flawed parenting. Nowadays Hollywood seems to concentrate on sneakily making films about how to be a better consumer-mother-workaholic-genius-breeder. No pressure – just entertainment.
at 9:40 AM