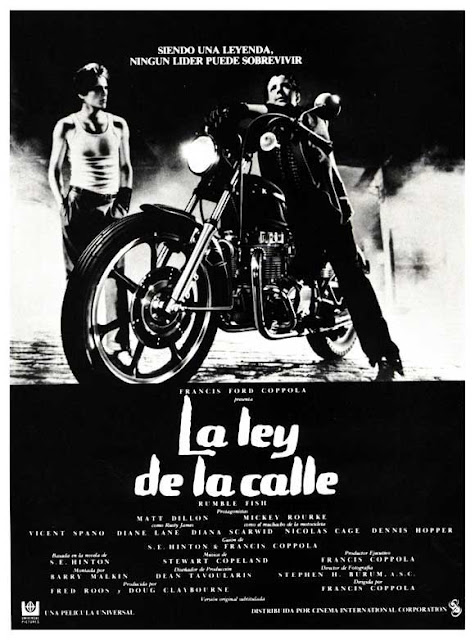 Nick:
One of the most embarrassing things can be the older uncle who thinks he's the cool guy and still down with the kids. Getting older and clinging to youth. I often wonder if I appear like that to people. I am firmly in middle age now (45 years old). I have adult responsibilities. Yet, I have the same burning desire and enthusiasm for my favorite interests as I did when I was a teenager. Have I simply not grown up? Am I clinging to youth? I mention all this as it seems in 1983 Francis Ford Coppola made two films about street gangs that tried to appeal directly to a youthful audience. Did he feel in the early 1980's that he was no longer the young guy changing the movie industry from within (along with a whole bunch of other New Hollywood people)? Was he simply just shot after the Apocalypse Now! adventure and the flop musical One From The Heart?  The Outsiders was the straighter of the two films, Rumble Fish the elegiac and one must add, more pretentious offering. Whatever the results, Coppola at least managed to introduce a roll call of new acting talent in both films that would keep movie theater's full for years to come.

As with the The Outsiders, Rumble Fish is based on S.E. Hinton's novel (she also co-scripted the movie with Coppola). This is where Rumble Fish struggles most. Frankly, the script is embarrassing. It's as if Coppola thinks it's OK if his characters spew out angst ridden cliche after cliche. This kind of dialogue may have worked in the 1950's (and especially in a Nicholas Ray movie) but by 1983 it makes Coppola look like that out of touch uncle I was talking about. But that's not all there is. You could say that the rot set in right here for Coppola as a film maker. What did he have to prove after the first two The Godfather's, Apocalypse Now! and The Conversation? Rumble Fish offers enough evidence that Coppola was actually embarking on his most experimental (if inconsistent work). Few movies from any era look as stunning as Rumble Fish. You can just ignore the terrible dialogue and bathe in the iconic imagery. You also have to factor in Mickey Rourke.

What makes Rumble Fish so fascinating now is how it captures Rourke at the height of his coolness. And he dominates Rumble Fish. Whilst everyone over acts or struggles with the material Rourke brings a calmness to proceedings, mumbling a la Brando, moody but gorgeous. Coppola nails the iconic Rourke here, on screen, in this movie. Dennis Hopper adds some Frank Booth like intensity, otherwise it's a parade of future stars and Tom Waits ( Matt Dillon, Diane Lane, Laurence Fishburne, Nichols Cage etc). Police drummer Stewart Copeland adds futuristic menace to the stunning visuals with his percussion heavy soundtrack. Rumble Fish shows Coppola trying to deal with his own mythology, growing old and trying something different. It's an uneven affair, but when it clicks, Rumble Fish can still take the breath away.

Astrid:
Yet another film about men – the angry, young and frustrated types, who simply channel their aggression into physical fights, their emotions into booze and drugs and their desire into sex. The bunch so loved by cinema, the guys that owned the last century; that's who Coppola decided to portray. He always portrays this group anyway, just think of The Godfather or Apocalypse Now. Men.

Rumble fish. Of course it's a simile. But I remember as a child watching one of these fish in its fishbowl at a neighbor's home. The girl did not have a mother and that already made me feel sorry for her. Then she had the lonely fish, which had to remain alone, because it would kill any other fish immediately. Luckily, the girl's father bought her potato chips and cereal with sugar. Those were things I was never allowed to have in my house. I had a fish tank though, with frogs even.

Back to Rumble Fish, sort of. Mickey Rourke is obviously the reason Jamie Hince looks the way he does. 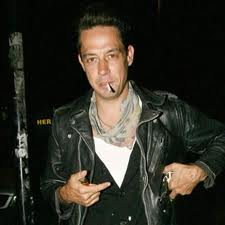 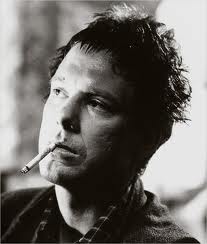 That's what we figured out. Too bad I am not in my biggest The Kills fan-phase, because had I seen this movie then, I would have loved it. The look, the photography and the pretentious air would have been just fine. Now I got angry and frustrated, but I'm not a young man, so what the hell can I do?
at 6:19 PM