The Passenger (1975) Directed by Michelangelo Antonioni 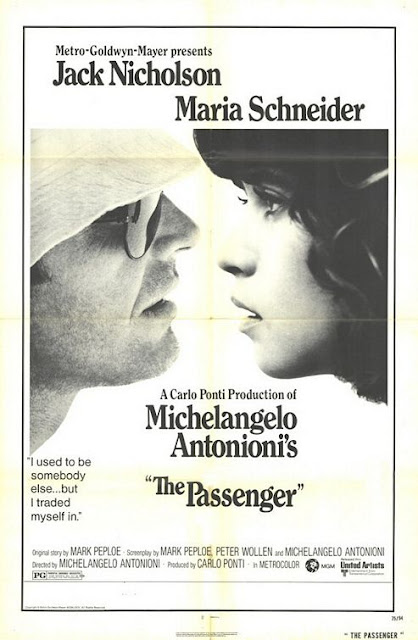 Astrid:
The Passenger is often silent, forcing the viewer to watch a narrative unfold visually. It is aesthetically pleasing, a little too slow and consistently distant as hell. The Passenger could be a description of dissociative amnesia. A man needs to bury traumatic experiences outside of his consciousness by changing identity completely, and by wandering around the world.

If it is not fair to see a whole film through a psychological diagnosis, maybe I should talk of deconstruction of the self. That's probably more appropriate for Antonioni. But deconstruction is also a little bit boring and hollow. As if art is there to be translated into analytical language; to be tamed and controlled.

The urge to wander comes from within. It rises up with emotion, but becomes so strong it demands action. Jack Nicholson has a true gift for portraying the wandering, disconnected type. The most inspiring way for me to settle into watching The Passenger is to see it as the second part to Five Easy Pieces (1970). What happened to Jack's character at the end of that film when he suddenly (and without a word) abandoned his girlfriend at a gas station and jumped on a truck headed for Canada? – Well, he just moved on to other countries, lovers, jobs, identities, movies and stories...

But did he ever get away?

Nick:
Do you dream of how to disappear completely? If you were presented with the opportunity to swap identities, lead another life, whilst most people would understand that the real you had passed away, would you grab it? Depends on your disposition I suppose. But imagine picking up on someone else's life midway through. You become this other person. It would also be worth noting whose identity and life you were taking over from. It's a dangerous game, and one that war reporter David Locke does not consider enough when taking up the identity of dead arms dealer David Robertson.

That sounds way conventional as a description for The Passenger. In reality, as with other Antonioni films (especially Blow-Up), dialogue is spared, image and atmosphere are strong. Jack Nicholson as Locke/Robertson gives to this role the required recklessness in a way that only Jack can. The recently deceased Maria Schneider comes into The Passenger at the half way point as the girl Robertson takes along for his nation hopping journey into darkness. She kicks in with the narrative and drags the film momentarily into being a more conventional road movie.

But The Passenger is a film about alienation. About the Outsider. There is no comfort zone watching this. It keeps you at arms length. It's a welcome study of willing exile. I found out the last scene of the film, an ingenious seven minute one take shot, has gained legendary status. This finale only emphasizes  Locke/Robertson's wish to disappear and be erased. It's fair to say cinema does not trust the audience as much as it used to, nothing is obvious here. It's a European perspective of the power of the medium of film to discuss noncommercial themes. Antonioni taps into a rich vein here. Nicolas Roeg was walking similar paths at this time with The Man Who Fell To Earth and Bad Timing. The Passenger is close to brilliant.
at 8:01 AM