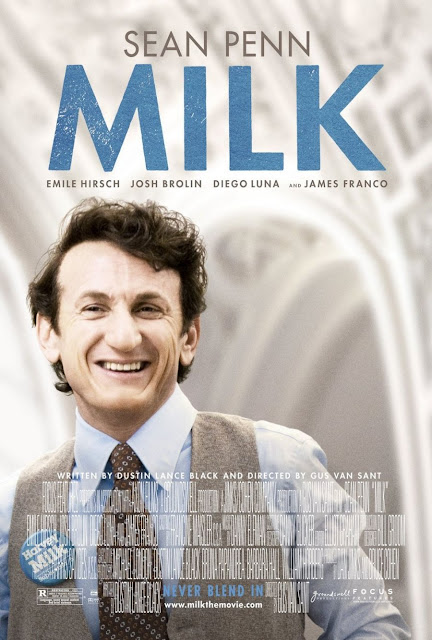 Nick:
Harvey Milk is someone from real life I find inspirational. A human being who ended up on this earth fighting hypocrisy, discrimination, bigotry and hatred in its worst forms. Milk seemingly did this with a smile on his face and a big heart. So yeah, if we're talking of modern heroes, they don't come any better than Harvey Milk and his fight for the rights of gay people. It's amazing to me that these events are so recent and how backward we are as a society that we even have to have this discussion. If you've watched the excellent documentary The Times Of Harvey Milk, then, in a rather sad way, I can't think of any reason for you to watch Gus Van Sant's movie Milk.

Yes, Sean Penn is great in Milk as Harvey. He displays a rarely seen sensitivity, Van Sant positions his film solely on Penn's shoulders. However good Penn is, it's too much responsibility for him to carry the movie when all other characters are left so shallow. This is a bio-pic in the most crass Hollywood terms, sharing facts, but little personal insight. Milk is never as gripping as the real life portrayal of Rob Epstein's aforementioned documentary, yet it covers virtually the same ground. Actors like James Franco, Josh Brolin and Diego Luna are wasted in poorly written roles that just keep the story moving along. I would love to say there were great scenes of fucking in this movie, but unfortunately even these are rare and very self-conscious in a "let's not rock the established order" kind of way.

I'm never convinced by Gus Van Sant as a director, he' so miss with the odd hit. For every Drugstore Cowboy  or Goodwill Hunting (both great), there is the frankly awful Psycho remake, Finding Forester and Last Days. You know Van Sant could be a wonderful art-house director, but he always has one eye on the mainstream and gets too confused. If Milk had been made from a personal perspective it would have been far more interesting than this piece of second hand furniture. Worth watching (just!) for Penn and some visual flare, Milk was a major let down for me. Harvey deserves better.

Astrid:
I was familiar with Harvey Milk's story through a great documentary on him. I think I saw it around the time Milk opened. I was curious to see the film as well, but the documentary kind of satisfied that need for the time being. Before watching the film I expected to see some different approach to Harvey Milk, but in fact Milk turned out to be strangely loyal to the doc. Whatever personal affairs and emotions the film tried to inject into the drama, it hardly took the narrative anywhere – the most interesting stuff became Milk's gender political campaigning.

I guess in many ways Milk was an attempt at mainstreaming gay rights issues in a social environment where things had gotten seemingly more relaxed, yet huge discrimination abides in the US and Europe.
If Brokeback Mountain (2005) had approached gay men as a romantic leading couple, in 2008 it was time in Hollywood to portray the larger scale of what it has meant to be gay in America. Lesbian women await that more politicized treatment from Hollywood, now that The Kids Are Alright (2010) has offered the personal-is-political viewpoint.

Back to Milk the film. I was impressed by its 1970s look, the way it was shot and the mood that was created with sets, props, and clothing. This was the first time I saw James Franco in a film. Strangely enough he reminded me of Heath Ledger, the other star of Brokeback Mountain. The film itself was in no way perfect or cinematic, but I'm glad it got to be made. What happened to Harvey Milk cannot be forgotten. If I ran for office in any political election, I would argue for more public affection. There should be much more public kissing and cuddling in general – between men, among women and in what ever combination. Public affection makes the world a safer place.
at 6:29 PM