The Kids Are All Right (2010) directed by Lisa Cholodenko 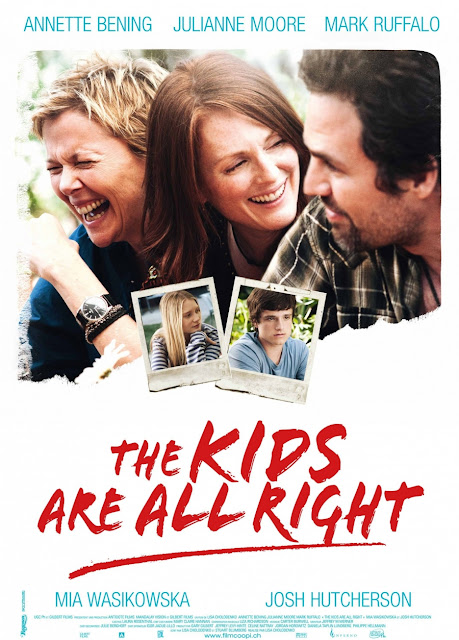 Astrid:
I really enjoyed and appreciated The Kids Are All Right when I first saw it about a year ago. I liked it for portraying a family with two moms, making lesbian parenting appear normal and lesbian love pretty usual too with the common long-term relationship hick-ups. I especially loved the film for Annette Bening, Mark Ruffalo and Julianne Moore – in that order. I embraced the politics of it all: finally Hollywood makes the lesbian film, after gay men had been starring in mainstream pictures for almost a decade.

On second viewing I dared to be a harsher critic of the movie. I still had fun watching it though. I liked the imperfection of the perfectionist Nic (Bening) – I saw that she was playing a specific written character, not a stereotype of the butch-partner. I still empathized with the womanizing Paul (Ruffalo), who found himself suddenly in the middle of a family drama in which he played dad. Nick felt the film did not portray him kindly, but I continued to like Paul – I guess it helped that it was Mark Ruffalo all along. What seemed to be a let-down this time was the written structure of the film: it floated from the funny relationship stuff and the in-search-for-a-father-figure stuff to being unnecessarily sentimental in the end. The boring guitar soundtrack music mixed with the storyline about the elder sister Joni (Mia Wasikowska) going off to college was an unnecessary way of saying 'look how normal a lesbian parent family really is'.

Despite there being a sense of the education program and appropriation project, The Kids Are All Right is a funny witty film, most of the time. The relationship between Nic and Jules (Moore) made me laugh aloud many times and at times it reminded me of myself in a relationship. I would file the film next to Sideways and Little Miss Sunshine – harmless California sun, light entertainment and real emotions all in good proportion for no one to feel overwhelmed.

Nick:
I just started reading Simon Reynolds' book Retromania about our obsession with the past and its impact on popular culture (specifically music). I think Reynolds is arguing that our unhealthy obsession with a time when everything seemed better than now (take your pick from the 1960's onwards) leaves less space for new ideas in our culture. I think this is a truism to an extent. I hate the way how old celebrated movies/records take away the space from new releases. Yet, re-evaluation also brings new perspectives on old works which can give new currency to the old classics. We begin to look at things in a new way. This blog mostly covers old movies, making me think are we just adding to the general air of 'things used to be so much better?' The Kids Are All Right names itself after a classic Who rockumentary (and soundtrack album), so its title certainly fits into what Reynolds is talking about.

The Kids Are All Right gives us what it would like to think is a radical examination of the modern American family. In fact, the selling point, Annette Bening and Julianne Moore playing lesbian parents Jules and Nic just confirms the conservative attitudes that pervades most straight society. Once you get over this condescension, The Kids Are All Right opens up into a well performed comedy. At times the patronizing tone of the script comes over as being a little bit too pleased with itself. Can we also have no more scenes in films where middle-aged former hippie chicks turned capitalist bastards rhapsodize on why Joni Mitchell's Blue was so special back in the day. You're killing it for us.

Quietly, the consistent Mark Ruffalo steals the acting honors (though his character is poorly treated by the script) as the sperm donor father Paul, who Jules' and Nic's children decide to contact. Bening and Moore (especially) overact as the picture moves on, making us feel less for their characters. By the end, long passages of bland music and aimless images reveal that The Kids Are All Right was really about the daughter coming of age all along. So The Kids Are All Right feels like a missed opportunity to go deep into the workings of the middle class American family.
at 2:27 PM