Astrid:
The third trimester of pregnancy in my case should be called the-sex-and-the-city trimester rather than the tired or huge trimester. The box was a gift from Nick. At first he meant to say that I can watch it when ever I want and just relax, but when we actually started going through the first season (out of 6), it became clear that he was equally into the whole series and did not want to miss episodes. The first and second seasons showed how this series really is not just about women, but it's just as much about men. Those two seasons remain the best. Carrie has not yet taken over half the series and it deals much more with thematic questions about sex and sexualities. As Carrie takes over, so do many other less favorable qualities. For example the focus on product placement isn't outrageously obvious in the beginning, but becomes a distracting feature by the third season.

I have watched Sex and the City on TV when it first aired in Finland. I have watched the reruns several times, and I even went to the cinema to sit through the two horrible movies. I have been the twenty-something woman who constructs her ideas about shoes, bags and relationships with a little help from Sex and the City. Now I wonder if it really was a worthy influence. I'm still hanging onto the 20-something-tag for at least one more month – nowhere near the ages of Charlotte, Carrie, Miranda or Samantha. I've not been single for a decade, I don't own any Manolo Blahniks and I don't really care for them, I'm about to be a mom  and no, my boyfriend is not filthy rich nor does he own a bar. But maybe it was this realization of how I do not relate that allowed me to enjoy the series in a light-hearted way. I'm glad I own the box.

Nick:
This last few weeks have been spent in the company of the girls from Sex & The City (Carrie, Miranda, Samantha and Charlotte). It's almost been a prescient time to watch the whole of Sex & the City. The euro struggles to survive as the whole capitalist/consumer society comes under attack from market forces and the dignified and needed Occupy movement. Candid sex scenarios from a women's perspective are  most welcome when we live in a society where so much sexuality seems to be discussed from a male perspective. This is where it can be said the early seasons of Sex & The City really work, these shows have edge and a great sense of humor.

As the series wares on, it becomes apparent that Sex & The City becomes aware of it's on success and the whole affair turns very self conscious. It's also the time I begin to wonder what kind of message is being sent out here. Sex & The City's ladies become impossibly decadent. A fantasy world where expense and emotion try to mingle in a game of spot the product placement. So, from my own perspective of not having (and actually rarely wanting), I found Sex & The City and the kind of life aspired to in the series (some kind of Manhattan neo-conservative fascist) remarkably offensive. These are tough times, so come the revolution I hope Carrie and her ilk are the first up against the wall! 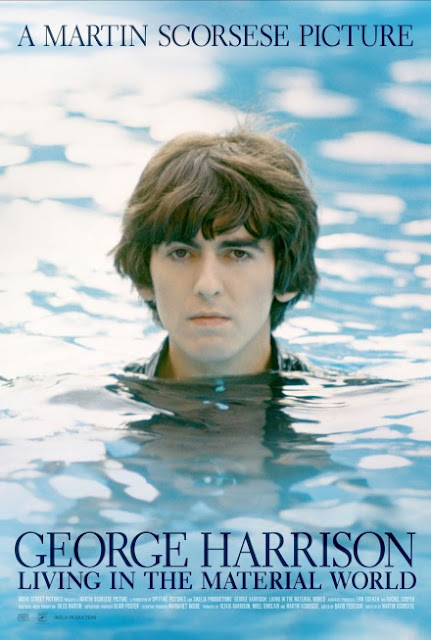 Astrid:
I was keen to see Scorsese's documentary on George. Usually, Scorsese makes great docs on rock stars and generally, The Beatles is a fruitful topic with plenty of angles and a lot to admire. Four hours of George and the three other guys and lots of famous talking heads and good music – sounds like a good idea. But I was a little disappointed. It felt like the doc never really began. There was never a strong narrative thread that took hold and delivered an insight. George remained a distant figure throughout. I felt that a lot of talking heads idealized him leaving out the criticism they most likely would have been able to deliver in another circumstance.

So George was a bit of a loner, a ladie's man in a stern quiet manner, a joker, a volatile angry guy and of course, a spiritual seeker. The emphasis here was on admiring George's involvement in meditation, sitar playing and all things Eastern and incense-smelling. What remained in the sidelines was the fact that he obviously battled with all kinds of substance abuse and with his own bursts of negative energy, bad temper, or what ever you want to call it. He was one of the Beatles and therefore the documentary was made with kid gloves on. Or maybe, George was a bit boring and Scorsese struggled to find interesting material on him...give me Bob and No Direction Home any time. A put-down with a frown is still more interesting than a mantra as a chorus.

Nick:
We go from the abundant materialism of Sex & the City to the anti-materialistic sentiments of George Harrison. Of course it should be mentioned here that being a millionaire Beatle and being able to have whatever and whoever you want at any given time from a very early age (in George's case an incredible early 20's), it's maybe easier to take a stance of anti-materialism when you are as rich as George was. Let's remember this was the George that wrote Taxman moaning about how much he was paying  to the British Government, so although having money was seemingly not important to George, giving it away obviously rankled too. Yet, this sense of contradiction in Harrison is something we take away with us whilst watching Martin Scorsese's patchy documentary.

The problem with George Harrison: Living In the Material World is it tries to take too much on board. Unlike Scorsese's excellent Dylan documentary No Direction Home, where Scorsese takes a certain part of Dylan's life and focuses on that, here he tries to fit too much in. So, this never goes deep enough into Harrison's life. It's a shame as some anecdotes are funny and there is some great unseen footage. Even more surprising about Scorsese's film was the small amount of focus on Harrison's guitar playing. Yes, we get a sense of Harrison's quick disillusionment with being a Beatle, but not enough about how great an innovator Harrison was with the six stringed beast. I expect more from Scorsese, so this was quite a big disappointment to me.
at 2:27 PM