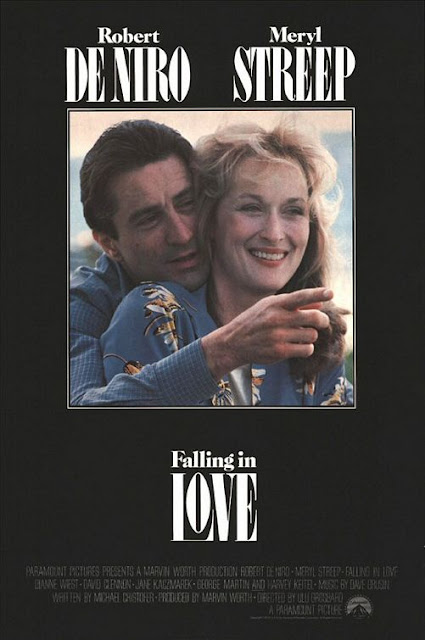 Astrid:
I went to the library last week and borrowed a pile of movies to watch while Nick was too busy to sit down with me. I have squirmed through Last Chance Harvey with the elderly Dustin Hoffman and Emma Thompson embarrassing themselves as new lovers. I knitted my way through Flash of Genius and was actually moved by The Great Debaters. One evening Nick was home and I had saved us the most romantic of my library choices, Falling in Love.

Falling in Love pictures Robert De Niro and Meryl Streep falling for each other in New York – or on the train going there actually. It describes the tangles and mess of being already married but falling for someone new...and not being able to recover from those feelings. This was a film I had seen a glimpse of many years ago on TV and had since dreamed of it as a great unattainable movie. Sure, had I seen Falling in Love in the 1990s I would have truly loved it. Now I could not help but notice that it was a little hollow here and there, the clothes on Meryl were 4 sizes too big and Robert's intensity was a misplaced leftover from Raging Bull or some other testosterone-role. After seeing him in all the aggressive and violent roles he was so brilliant at all through the 1970s, as a viewer I could not trust that he wasn't actually a psycho waiting to blow his fuse...not a good thing for a romantic drama with no intended edge.

Falling in Love casts the great Diane Wiest as Meryl's single girlfriend. Although her role is not big here, she is funny and deep even in the small supporting role. I have grown to love Diane Wiest over the last couple of years. Not the least because of her role in Hannah and Her Sisters and her version of a psychotherapist in the TV-series In Treatment. She is the New York woman.

Nick:
My life is a perpetual blur at this time. Flu has been a constant companion, I just cant shake it. I'm drowning in things to do, the in-tray permanently full. I'm waiting for a lull. It feels like it ain't coming. So this past Sunday finally arrives and palatable relief. I've not had a genuine day off in weeks. Here it is. Time with my family, nice. Unwind, relax. Falling In Love, let the blandness wash over you. It's an easy option when my brain won't engage. Powerhouses of American acting share the screen, New Hollywood graduate behind the camera, it's a sure fire wet dream! No? Why? Surely? Don't piss on my undemanding mode of operation. This film's actual stiffness becomes a problem that precludes me from merely just enjoying it.

Here's the problem: Grosbard has a history of average movies behind him, with a couple of alright efforts (True Confessions, Straight Time). He brings willful arty pointlessness to Falling in Love. This could be OK in some faux-European-Art-House-movie sense, but Falling In Love has the flat feel of a US TV movie from 1981. Falling In Love also takes an age to get going. So, in my tried impatience, I don't want anymore scenes of the main protagonists Meryl Streep and Robert De Niro nearly meeting on their train into New York, nearly exchanging glances and so on ad-nauseum. It's shocking that De Niro and Streep accepted this slow slow slow build-up. Falling In Love is a picture about finding one's true love despite existing, established surroundings. The chance meeting. Is this a new Brief Encounter? If only.

I did catch this when it first came out. It was all the rage back in 1984 and I was seduced by Streep and De Niro. The pretension that so inflicts almost every frame of Falling In Love was somehow acceptable in those hollow times. When eventually these confused lovers get it together in Falling In Love a sense of "thank god this is over" transpires. A wooden turkey from people who should know better.