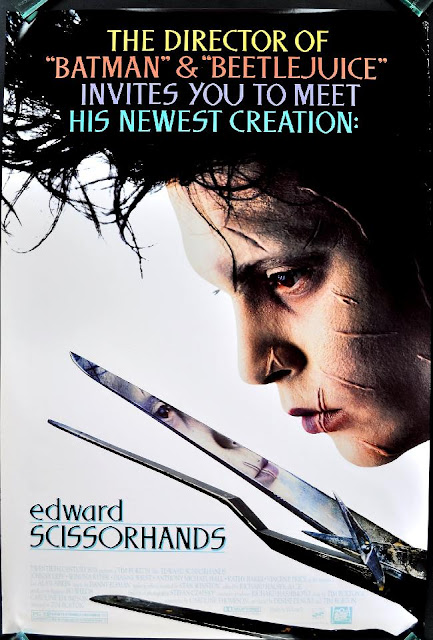 Astrid:
As a child I missed the fall-in-love-with-johnny-depp boat. I just didn't get on it and then it got difficult later in life. I'll admit though, that once he got old enough to seem a bit ragged instead of just beautiful, I like him better. One big reason why I didn't get Depp like all my girlfriends was that I totally missed Edward Scissorhands. Can you believe it? I was just the right age to be very impressed by it in the early 1990s, and it was everywhere – oh, the references I must have missed. For me Winona Ryder was also a phenomenon familiarized by Little Women, not Edward Scissorhands.

So in my 30th year, among many other baffling and strange things I had never tried before, I finally saw the film. And I shared the experience with a lucky 10-year-old who got very frustrated and sad because she thought the film was hopelessly sad and downward-spiralling. She did not realize, how amazingly lucky she is from my perspective. She's not missing out on major cinematic shifts. My theory on why she got so very upset is that she has been totally bitten by the johnny-depp-love-bug already. He's still hanging around for this generation of girls...in pirate costume, in a chocolate factory and everywhere else.

Edward Scissorhands is a good movie even though I was hopelessly late for it. It is a light look at difference contrasted with monotony, and a look at the inability we socially have to accept anything different from our norm. It was romantic and kind of funny. In my opinion though, the film was light as a feather. I cannot help but associate the discovery of it with the discovery that I grew up in bubble when it comes to popular culture. That's why I'm writing this blog now: I'm taking it all in and devouring pop with a hunger. I don't have scissors for hands, but I relate to Ed(ward) – a little.

Nick:
Johnny Depp eh? What a cad. Nowadays Depp sleepwalks his way through many a picture, picking up some ridiculous paycheck at the end. There was a time when he was the king of quirk, making many a flawed art-house picture for cult audiences pre-the-Pirates franchise. It's clear now that Keith Richards wasn't the first rock star that Depp mimed for onscreen inspiration. Depp's early collaborations with Burton are in my opinion the best Depp pictures. With Edward Scissorhands Burton and Depp are able to create a modern day fairytale where the main character, at least on a visual level, is based on The Cure's front man Robert Smith. 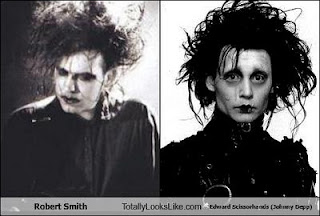 I haven't watched Edward Scissorhands in many years, so I was surprised how well it stood up.  Not only this, I'd say nowadays this stands as a modern classic. This is no news to anyone, it's hardly an obscure film. But it's a strange film, with a singular vision. Edward Scissorhands mixes post-war (1940's) sensibilities/visuals, old school-Hollywood Horror (Vincent Price!) with Lynchian attitudes and Walt Disney fantasy to create something new. Not only this, but Burton manages to imbue the picture with a great sense of humor (there are many laugh-out-loud moments). The film's eccentric take on American suburban uniformity has endured. Its message of tolerance to difference is more relevant now than ever in a world that can't accept any change or the other.

Winona Ryder is the love-interest (around this time Depp and Ryder were an item), the chemistry between the two leads is palpable and ultimately makes the picture moving. Lets be honest here, Ryder can be awful, this could be her best role. But it's Depp all the way that one remembers. As Edward Scissorhands Depp displays the makings of a future star (this was his first performance to make a mark), but one who understands restraint. He returned to this standard in later Burton pictures but never quite with this comic intensity. Edward Scissorhands still has the capacity to move and bring a lump to the throat, it's an emotional picture. A true original, Edward Scissorhands really might turn out to be Burton's masterpiece.
at 6:23 PM