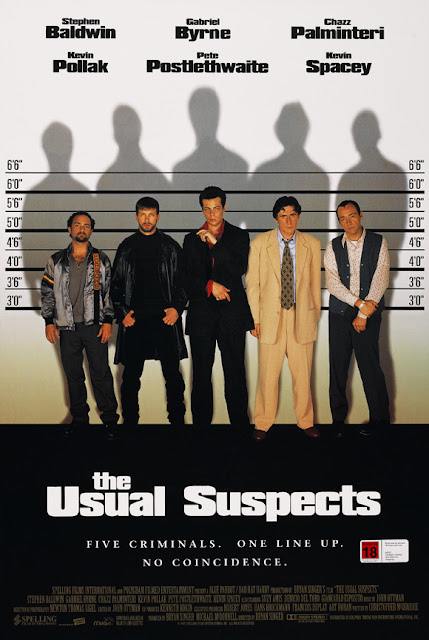 Astrid:
Kevin Spacey is so dubious and emotionally expressive in his role in The Usual Suspects that it takes me less than one minute to remember who is the villain in the film. Anyway, his acting is good and worth watching despite the spoiler. Kevin is great as the loon – in fact he seems to have played the same character in K-PAX (2001) and to some extend in Shipping News (2001) too. Or is it just me thinking of him as the arcetypal psycho (even in American Beauty 1999)? For a decade Spacey seems to have been cast into a strict role in Hollywood, just like Jack Nicholson was before him.

The Usual Suspects was released in 1995. It makes me want to take back what I said in our last post about early 1990s cinema turning into vintage goods. This film has no cinematic value. It is just recounting a plot with an underused cast and no emotional connection. Not having experience in film-making, I can only imagine that the emptiness of The Usual Suspects comes from a failed connection between the script-writer, director, photographer and producer. Somewhere the chain and co-operation must have run out of inspiration.

It is an uncomfortable feeling watching a film that thinks it is very clever and figuring it out as dull and unintelligent. 1995 was also the year of Seven. If my memory serves me right, it is a much better twisted narrative with a more cinematic look to it too.

Nick:
Reputation and standing.  Game changer. The new rules. The original. We would all like to be part of something or be the instigator of a new movement, the zeitgeist. You could dine out on this forever. I remember going to see The Usual Suspects on release and being really impressed. It seemed to invigorate the hard men on a mission movie, and of course it had the twist at the end that seemed so ingenious all those years ago. But reflecting on movies made in the mid 1990's, and one as celebrated as The Usual Suspects is tricky nowadays. One cannot dodge the greatest movie of all time lists without finding The Usual Suspects contained somewhere amongst the other er,  usual suspects (hello Empire magazine!) Most aspects of this film disappointed me this time round. It's all about timing and what we know now.

Director Bryan Singer, seemingly hot when this picture came out has turned into a Christopher Nolan-lite superhero movie director and a pretty poor one. Writer Christopher McQuarrie, so smart and on the cusp of greatness and never ending promise, followed Singer into X-Men spin-off hell. The Usual Suspects looks so poor nowadays, like a made-for-TV-movie. Who did the lighting on this? But what about the acting, surely this stands up? Career making turns for Kevin Spacey and Benicio Del Toro must still work? Both ham this up, and in Spacey's case he really is acting, unfortunately without any naturalness. The late, great Pete Postlethwaite acts everyone off the screen here, whilst Gabriel Byrne is his usual solid self.

But it is that timing thing. The Usual Suspects seems contrived in 2011. It's "unusual" flashback narrative feels over done, the plot twist obvious. I have to leave this picture for many years. Give it 15 years or so, and if I have the inclination to re-visit, The Usual Suspects may find it's freshness for me again. For Singer, The Usual Suspects means that the movie that cost 6 million and made over 1 billion will buy him lunch in Hollywood for a long time.
at 7:31 AM