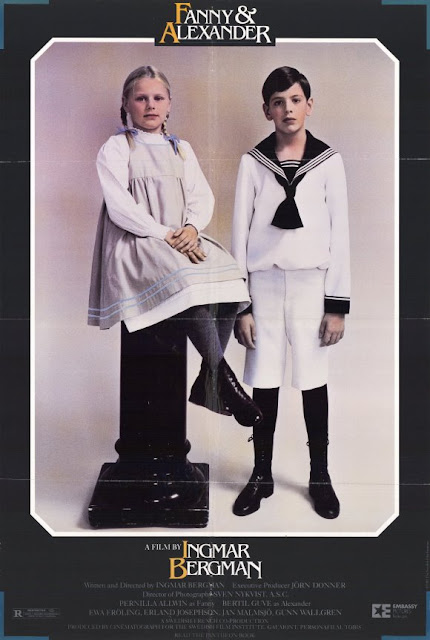 Astrid:
I saw Fanny and Alexander as a child. Therefore, I thought it was a fim suitable for children. Now I was shocked to find out it was K16 – I had bought the DVD to watch with a ten year old...I remembered the film as a sweet, beautiful and honest depiction of family, Christmas, tradition, beauty... I remembered the maid having sex with one of the family sons, but I still thought this was a feel-good film for kiddies.This whole misconception and the total failure of my memory seems somewhat crucial in thinking back on my childhood. Was I free of overprotection or was I in fact under-protected? It seemed to be a normal thing back then to go to a friend's house and watch a horror film or Bodyguard at the age of 8.

Memory is an unreliable living part of me. It changes and alters my reality, sometimes protecting me, other times exposing me to my past. As I relived Fanny and Alexander, I wonder why I was allowed to watch this film and where I saw it in the first place. Was it a great thing that I was not totally protected from the adult world growing up? That's what fascinated me about this film, peeking into secret lives of adults. This time I was baffled by the cruelty and fright present in the film; the dangerous murderous priest, the unhappiness that dried old people to the bone, the mysterious ghosts that haunted only children. Did I take all that for granted as a child or did I not notice?

Ingmar Bergman is a cinema god, his imagination is vast, decorous and completely truthful at the same time. We haven't written about his films here because we've had a subtitle problem (no English subtitles in the Scandinavian boxes). Still, I have gone through periods (summers) similar to my Allen moods, where I only watch Bergman films, so he has truly been neglected here. Fanny and Alexander shows Bergman's ability to empathize with his subjects and his unwillingness to simplify characters, stories or life at large. Events move from one to another seamlessly, never releasing the viewer from tension even though places and people change. It all flows like liquid. If I could choose a director for my biopic, it would be B.

Nick:
I was in this shop today that  recently opened in Helsinki called Tiger. It's a Swedish brand and it's basically a high class version of your classic Euro store or Everything-for-a-pound shop. So we blew some money on nonsense we don't need (black candles, picture frames etc.). Astrid made the comment that the store is without ethics and therefore shouldn't be supported. Rather like Ikea, H&M and a few other Swedish consumer ideas the people that make the goods in these stores don't get paid. It's the new liberalism that Sweden is exporting around the world. Exploitation of cheap labor without guilt. As trade and consumerism reach the end of their natural cycle, Sweden is just honestly saying, "Here, it's cheap, don't worry where it came from, looks nice eh?" It's hard to fault the casual Swedish way. I am constantly struggling to earn a living right now, yet I can easily blow some Euros on goods descended from some far off sweatshop. And, it's not as if the rest of the world isn't doing the same eh? Why am I holding the Swedes up as an example?

Well,  two wrongs dont make a right and maybe I'm just purging my own guilt caused by some useless consumerism. Maybe living in Finland for many years has meant that the feelings of inferiority as regards Sweden felt by Finns is finally rubbing off on me. Of course, amongst many other pursuits, I can always go to the films of Ingmar Bergman for validity of Swedish goodness and ignore the modern consumer injustices of the world. Another film about aristocracy and the rich, us have not's obsession. Fanny and Alexander however is never in awe of the wealth or judgmental of it, it merely is there. If anything the movie rather humanizes these well-off  Swedish denizens. Fanny and Alexander further more never patronizes the audience, it just merely involves us in these lives, regardless of class.

I haven't watched so many Bergman movies (Seventh Seal, Wild Strawberries, Cries & Whispers). But those that I have are astonishing. Bergman musing on the human condition always seems revelatory to me. But he also shows me a genuine humor and humility about the Swedish people that I find truly humbling and recalls a great feeling I get whenever I visit the country. Fanny and Alexander is far more modern than I realized (I always thought it was a 1970's picture). Its brilliant tales of the Ekdal family and the sometimes traumatic experiences of the young children Fanny and Alexander, still feel like nothing else out there. This is cinema in its essence.