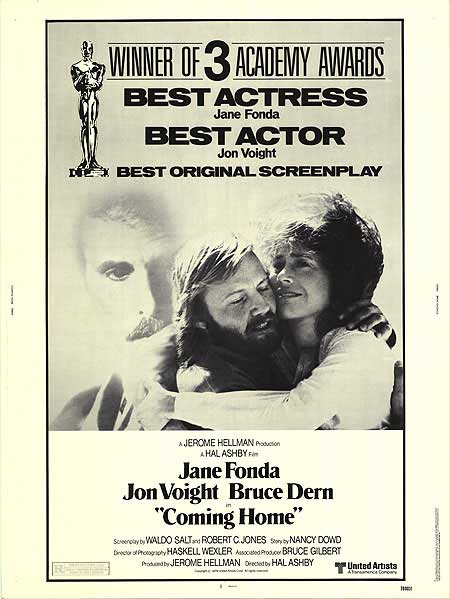 Nick:
Hal Ashby is often regarded as the good guy from the New Hollywood era. Much loved by actors, his modest hippie temperament ultimately turning to drug dependency; he is one of the casualties of  New Hollywood. Bruce Dern, who stars in Coming Home, said: "What happened to Hal Ashby, both what he did to himself and what they did to him, was as repulsive as anything I've seen in my forty years of the industry." Coming Home could be the last big hit from New Hollywood, its many problems as a film, a great example why the director-led New Hollywood era came to an end.

Coming Home feels like a rotting corpse. It's smug, indulgent, self-satisfied. By 1978 punk was happening and the 1960's reverence on show in Coming Home must have seemed like arch sentimentality. It really feels like that now. Sure, Coming Home is really well acted. Yes, it makes a comment on the wastefulness of the Vietnam War. But by this time, Hollywood and America itself had really discussed and considered the Vietnam War. As similar rallying calls and comment on this war, both the later Apocalypse Now! and the same year The Deer Hunter would show more ambition and edge. Offering no new perspective or insight, all Coming Home leaves us with is the romance. Jane Fonda and John Voight have chemistry for sure. But you never find it believable why Fonda's liberated nurse would stay with her Vietnam returning husband (an ever reliable Dern). It's also inconceivable that Voight's character would change so conveniently from bitter paralyzed war veteran to all round good guy and the sensitive spurned lover.

Coming Home has its great moments. Unfortunately, Ashby reduces the tension on screen with a soundtrack of great hits of the era (Stones, Beatles) constantly playing in the background like muzak, often unrelated to the scene. I'll remember Ashby for The Last Detail and Shampoo. Give me Jaws and Star Wars over this any day. Coming Home is well-meaning, but ultimately fails with its simplified and sentimental portrait of why America didn't deal with its war casualties with more empathy.

Astrid:
Coming Home is a film I wanted to see because it is a 70s movie, and it has Jane Fonda in it. The Director Hal Ashby is also interesting. I had forgotten that New Hollywood is not always a synonym for subversive or great. Coming Home turned out to be strangely conservative and coy. At times it reminded me of Forrest Gump (1994), which was my first cinematic encounter with the Vietnam War.

Yet, on entertainment level, I was quite content. I was well entertained actually: The angry and dangerous war veteran (John Voight) turns into an adorable lover and a campaigner for peace. The stifled and overly sweet Sally (Jane Fonda) is liberated from the constraints of a boring marriage. Sally's husband (Bruce Dern), returns from Vietnam the same arrogant and ignorant person he was when he went there, although now he is traumatized. When he finds out Sally has been seeing one of the veterans from the recovery hospital (where she had gone to volunteer), the husband threatens to murder someone or himself. A little tense, yes, but not really, because Hal Ashby has added a pop soundtrack on every scene of the film. Even while intimate dialogue is happening, there is always a Rolling Stones song or a Beatles tune playing in the background at a disturbing volume.

Jane Fonda had been vocally against the Vietnam War from the early 1970s onwards. After her visit to Vietnam in 1972 she was dubbed Hanoi Jane and deemed unpatriotic by the US press. In light of her activist past it is not surprising that she said yes to Coming Home, but it is baffling that the film handled the issue so lightly.
at 8:01 AM