The Aviator (2004) Directed by Martin Scorsese 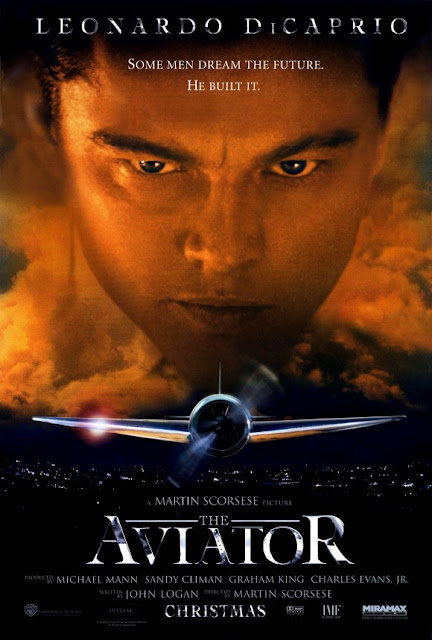 Nick:
I've had the worst runny nose of my life this week. And it's still runny! Stop! Now! It's been over a week. Is this a permanent state? The amount of toilet roll used to blow, soak and wipe away the slightly green gunk, well, it's a forest or two I'm telling you... I've also found myself in a period of time where I've been extremely busy. So, flu and work = lack of full strength recovery. So, through tissue and sniff we decided to go for The Aviator again. It's always struck me as a very accomplished yet cold piece of film making. After The Gangs Of New York (a bombastic failure for Scorsese), The Aviator sees Scorsese turn his attention to another slice of vérité, his portrait of the early rise to notoriety of American aviator, inventor, film maker, rogue, freak, racist, compulsive disorder victim and crucially, filthy rich Howard Hughes.

Something happened this time however. I finally got what Scorsese was trying to do with The Aviator. Through the early life of Hughes, Scorsese has managed to make his own Citizen Kane and in part even pay homage to Orson Welles' classic. Leonardo DiCaprio as Hughes even resembles the young Welles. So here we get the flashbacks to the influential youth, the rise and fall of Hughes, before he once again triumphs in designing and flying the era's biggest aircraft ever. I've always found Hughes' life after the time frame of The Aviator more interesting. That Hughes (as written about fictionally in James Ellroy's Underworld USA trilogy) is the one whose compulsive disorders ended up taking over his life, as he became a recluse in the Desert Inn Hotel, yet still holding influence over all aspects of American life. That influence includes plotting with and against various US Presidents, owning Las Vegas, the daily blood changing which earned him the name of Dracula amongst the FBI, and his open racism. Hughes had an agenda and the older he got, his money and power still exerted itself. The Aviator steers clear of the darkness in Hughes and is more a celebration of his genius and creativity (although Scorsese does focus acutely on Hughes' phobias).

So Scorsese gives us early Hollywood glamor in a special turquoise tint for the first 50 minutes of the picture. He also uses unsubtle CGI to show us many of Hughes' daring flying exploits. Cate Blanchett impresses as Hughes' early squeeze Katherine Hepburn, but it's DiCaprio who burns up the screen. The Aviator justifies Scorsese's choice to make DiCaprio his acting muse in recent pictures. This film has got better for me, and gives me hope that even some of Scorsese's more recent, so-so fare will improve with age. The Aviator, seven years on is starting to feel like a great Scorsese picture.

Astrid:
I remember thinking after the first viewing of The Aviator that it was a depressing and sad film with too bright colors. I also blamed it for being cold and grand without reason. This time around I thought the whole movie was saying: never underestimate the mentally ill. While the film described Hughes' descent into being overpowered by his illness (which at first only effected some areas of his life) it simultaneously celebrated his amazing creativeness and admired his fight against the even bigger guys.

Nick has been going on about Howard Hughes for years – the blood changing and the Nevada desert, casinos, power and more peculiar power. I have been rather annoyed by his fascination, or maybe by the the tone I detected, making the guy sound like a vampire master planner with evil intent.
Yes, it may be that there was some of that too. But this time The Aviator made a lot more sense to me because actually it humanizes Hughes (the racist vampire legend) and sympathizes with him.
Ironically, this sympathy sounds from the analysis that it was the mother of the child who effed him up (to put it politely). It's always the mother, right...Well anyway, this is a film about obsessive compulsion.

Despite the masterful editing and coloring of the movie and the wonderful set design and costumes, the focus of the movie is DiCaprio as Hughes. The Hughes who is not that ill when flirting and having sex, flying and making movies, but is very very ill all the other times. The Hughes whose list of pattern behavior for safety gets so long it isolates him from other people almost completely. And yet, when people believe they can humiliate him in public and can thus force him out from the aviation power game, he manages to make a public appearance defending himself, winning the case. DiCaprio is very believable in his role, which at times makes the film uncomfortable and very emotional. This time I understand why Scorsese decided to make his film about Hughes describing this rather early period of his life; he wanted to celebrate and appreciate rather than fortify the mythology that surrounds Hughes just like it surrounds mental illness even today.
at 2:29 PM