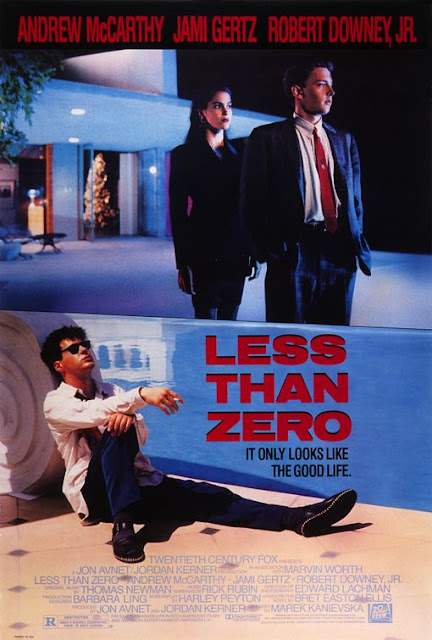 Nick:
As I get older I've found myself on a mission to take my own path and be less influenced by the thoughts of others. I don't mean this in a 'taking advice' sense, but more in what people recommend me. In this respect, I'm stubborn and choosy. The word has always been that Less Than Zero the movie is a travesty, that this take on Brett Easton Ellis' debut novel is worth avoiding at whatever cost.  Even Ellis has in the past disowned the picture and has stated that the film has very little do with his novel. So, 23 years later, against better judgment, and with the constant nagging that I'm a fan of Ellis' work so how bad could the movie be,  I visit this film for the first time. People, trust your instincts!

It's hard to write about this movie in anyway, I felt  so uninspired after watching it. Kanievska creates no atmosphere on screen, this is a flat picture, like champagne that's lost the fizz. Kanievska is let down badly by his musical director Rick Rubin. Through a selection of woeful tracks Rubin somehow means to tell us that coke snorting yuppies from LA listened to poodle- rock at their swanky parties. Movie soundtracks hit a new low with this.  I'm pretty sure (although it's been years since I read it), the book is much more New Wave centered in it's musical tastes (hence the title), which certainly would accompany the look of the films characters. Production design, script, acting (Robert Downey Jr !!??),  all suffer from a similar air of carelessness.

Serious liberties (in every respect actually) have been taken with the book and especially the character of Clay (played by a lost Andrew McCarthy). This is a very hetero view of vapid Hollywood youth. Kanievska makes the mistake of trying to make us sympathize with these characters which is impossible. It's the lack of morality that these upwardly mobile LA creatures display that creates our interest in Ellis' book. We don't want to see their virtues.

Ellis' books have all been adapted poorly for the big screen, but Less Than Zero is the worst of these. I read recently that Ellis had changed his opinion on the film and quite liked it nowadays. Hey, Brett!  Trust your original instinct. No revisionism needed here.

Astrid:
It's LA youth again. Because we watched this film so close to Rebel Without A Cause I feel it is an update on the situation. So my difficulty with relating to the pain of rich late-teenage rebels continues.

The 1980s appears like a cold and vacuous time in LA. Young people are cynical, lonely and wear awful clothes and bad hair. I know that Bret Easton Ellis can describe emptiness and disconnection in an engaging and dangerous way, but Less Than Zero the film fails to be anything more than a vacuumed-out space wasting my time. It doesn't even make me angry enough to be something.

Clay, the good son who has left his hometown for an ivy league college, returns to find his girlfriend and best friend are having an affair. And of course, they are doing a lot of drugs. Clay is an incredibly one sided stone-faced boy according to the movie. He's 20 going on 50 and I don't understand what he would be doing with a couple of drug vacuums in the first place. No one would write a main character in their novel like this, without any faults or contradicting characteristics.