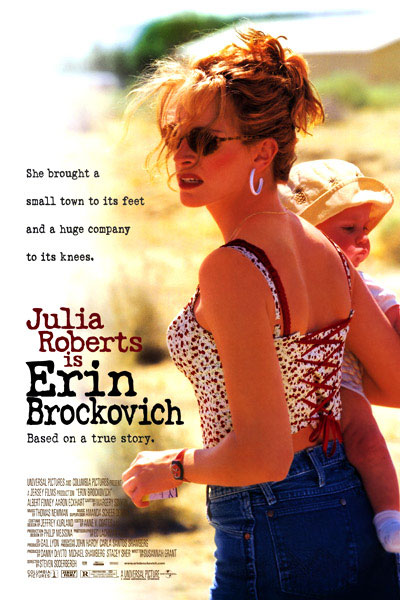 This film deals with class, sexism in the work place, human rights, big corporate corruption and anything else you want to throw into the kitchen sink. Yes, it's a political beast with a David & Goliath bent. But what make Erin Brockovich work is that Soderbergh never forgets to entertain. The script is sharp and foul mouthed. Erin as portrayed by Julia Roberts is an old-school New Hollywood turn. Roberts is an actress I've not particularly enjoyed on screen (although she seems to save her best work for Soderbergh), but this is one of the least self-conscious turns by a mainstream actor I've seen. Yes, she carries the film.

Albert Finney is perfect as the head of the law firm that employs Erin. Finney has rarely been so well used in recent years. All the bit parts are well cast and as is typical with Soderbergh there is a lightness of touch which seems effortless. He's a director when on form, as he is here, never feels like he intrudes on the storytelling. You don't feel there is heavy moralising going on. The fact that this is a true story only confirms the injustice we already know exists amongst the world of big coprporate business. If you've shied away from this picture in the past, thinking of it as just more maintream fluff, leave your prejudice at the door and check it out. Smart and vital cinema such as this is rare these days.

Astrid:
I wonder if the True Finns (Perussuomalaiset) party who just marched in force into the next government of Finland see themselves as a kind of Erin Brockovich phenomenon? Mr. and Mrs. Avarage saving the world from the evils of corporate power? Who knows what they plan at this point...

Although I have long since missed out on becoming the next Erin B – I am over-educated, fearful and I don't have Julia Roberts' looks – Erin Brockovich is still an entertaining and strangely empowering movie. I love its claim on reality, because Erin really does exist and has won her fight against an evil corporation. Once in a while it is nice to know that the stories of cinema have a connection to our non-movie-like realities. And sometimes something positive happens in life, not only in movies.

Erin Brockovich says: you can have prominent boobs, know it and still be able to think, fight and argue for yourself. I guess something in that statement continues to be revolutionary to some of us.
The film also shows that even though a woman has three children, it can be crucial to her to build an identity through her work, be recognized for her influence in society. Also, this movie does not claim that Erin would be happiest if she listened to her motorcycling boyfriend/neighbor and quit her job to play house with him. He fades away because her priority is her work.

Erin Brockovich is a call for common sense. I'm worried though that sometimes common sense can be hijacked by hillibillies and then it becomes oversimplification.
at 8:01 AM