A Tale of Two Cities (1958) directed by Ralph Thomas 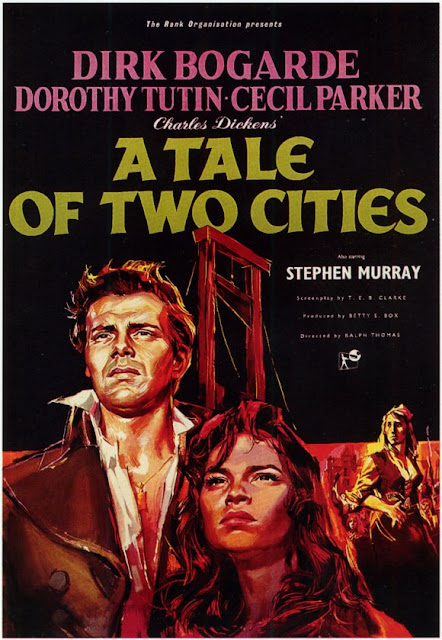 Astrid:
What an achievement! We have finally sat through an entire movie and can thus continue with our reviews here. It was a good choice to begin again with something very plot heavy, since with this continual level of exhaustion, more abstract storytelling might have gone out of my head by now.
A Tale of Two Cities is a Dickens adaptation. The writing has been so great and the plot twists so juicy that to make it cinema in 1958 very little needed to be altered. Therefore, there is a sense of watching a filmed play. Nothing so cinematic about this movie. But as I mentioned, the plot is good enough for entertainment.

A Tale of Two Cities has an impressive line of old English actors, as  Nick will no doubt tell you later. Dirk Bogarde is in the central role here. And with his character, what we know about the movie star mixes with his role. Dirk is as gay as they come in his role as the noble drunk, who falls madly in love with a woman he cannot have. In a combination of over-interpretation and just taking the film as it is presented it appears that Dirk's character is in love with a woman, but his sexual preference stops him from acting upon his feelings. To not have to deal with his sexual frustration he then drinks himself silly everyday –– and in the end sacrifices his life, which is the ultimate penalty for being so 'badly' adjusted to the sexual politics of the time...Yes, quite a bit of interpretation required to see the film as I just described. But the whole love story seems a bit boring and naive otherwise. I have always found Dirk Bogarde an uncomfortable actor to watch, greatly due to the roles he plays. Here his drunk dandy did seem endearing.

As A Tale of Two Cities was about the aristocrats losing their cruel grip in France, it also presented us with a load of 1950s perspectives on the French peasants. Oh, they were savages, thoughtless, mindless blood sucking vampires who turned out to be even more cruel than their oppressors. It was the good old English gentle ladies and men who warmed our hearts – the upper classes of course.

Nick:
Dirk Wears White Sox! So sang Adam Ant and why not.  Dirk Bogarde was someone I found fascinating whilst growing up. I didn't know too much about his earlier matinee career, but around the age of 18 I watched blacklisted American Director Joseph Losey's The Servant (a key Bogarde picture) which had a profound influence. It opened me up to Losey's cinema, but also made me delve back and forward through Bogarde's career. I then watched all the Losey/Bogarde movies (Accident, King & Country, Modesty Blaise). The later frankly overrated art house period (the ponderous Death In Venice and pretentious Providence). The matinee years prior to his work with Losey included the high camp of The Singer Not the Song (the gayest cowboy ever), The Spanish Gardner, and the family friendly Doctor series. Throw in British cinema's first openly homosexual character in Victim, helping Julie Christie win her oscar in Darling, Visconti's The Damned and the truly dreadful The Nightporter and one of the most interesting cinema acting careers imerges. On top of this, there are his secretive,  pompous novels (many I've read).

So, A Tale Of Two Cities, this is prime Dickens and thus in many ways a great yarn verging on Soap-opera. The French Revolution from the view of the overthrown Aristocrats (hilarious in itself). Bogarde effortlessly raises the movie to something approaching great with a knowingly camp raised eyebrow as alcoholic barrister Sydney Carlton.  He almost looks bemused at the commonness of all that goes on, yet we feel enough empathy with his smug dandy to feel genuinely shattered at the end. A roll call of excellent British acting talent appears here : Dorothy Tutin, Cecil Parker, Ian Bannen, Alfie Bass, Christopher Lee, Leo McKern and Donald Pleasance. This means Director Thomas is able to keep us engaged even when Bogarde is not on screen.

But really, there is almost disdain from Bogarde at times here. The suggestion that he would ever fall so messily for a woman almost derails the picture's credibility. You sense he'd much rather be doing naughty things with Paul Guers as Bogarde lookalike Charles Darney. As so often happens in Bogarde vehicles of this time, this heightened sexual confusion only adds to the charm of the picture. A Tale Of Two Cities resonates still because of this. Bogarde's white socks are kept under rapt by thigh length black leather boots. Need I say anymore? Quality entertainment.
at 6:15 PM