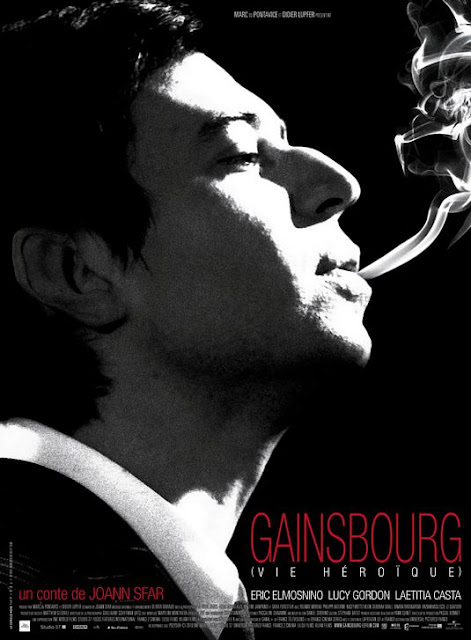 Nick:
The musical icon biography rears its head once again. In this case, Serge Gainsbourg, one would hope a movie about his life could open his wonderful music up to a wider audience. That's not to say that Serge's music is obscure, it's just that most people know he's responsible for J'taime Moi Non Plus and  recognize little else of his work. Amongst the keener music enthusiast Gainsbourg's reputation as an artist of serious note has increased over the years. By the time of his death Gainsbourg had reached national hero status amongst the adoring French. Gainsbourg's passionate rebellion and casual sexism endeared him to a public who initially viewed him as a grotesque. This in itself is quite astonishing when discussing a popular writer of song, whom over a period of time, radically experimented with his sound and his idea of the conventional song. There was also the incessant smoking and then of course, there's the women.

Sfar, basing his biopic on his own graphic novel, uses some touches of surrealism throughout the movie. This mostly comes in the form of a huge puppet version of Gainsbourg (resembling The Count from Sesame Street) whom the real Gainsbourg (brilliantly portrayed by Eric Elmosnino) often converses with throughout the picture. One of the problems with Gainsbourg is the willful artiness associated with this technique, which Sfar persists on using. The first half of Gainsbourg pretty much whizzes by in a very entertaining fashion that shows Serge the artist finding his confidence as a boy in Nazi occupied France, before he gives up on painting. Choosing to peruse a career in the less credible pop world, Gainsbourg shows us how Serge, through reputation as an extraordinary writer of song, in essence becomes a 'babe magnet'. Juliette Greco, France Gall and Bridget Bardot all come into the Gainsbourg orbit. Then, he meets Jane Birkin, played by the late Lucy Gordon in her final role.

Nothing in Sfar's film looks or sounds as good as this

It's at this point that I wanted more from Gainsbourg. From the late 1960's onwards Gainsbourg's music became more interesting, a fact which Sfar loses perspective of and pretty much ignores by focussing on the personal life, albiet in a fleeting manner. This isn't helped by Gainsbourg's music being reinterpreted in the movie by actors - often flatly compared to the originals. One has to ask why? Could this be the last time this happens? I cant imagine say, Kirk Douglas re-painting Van Gogh's masterpieces in Lust For Life. Why does Sfar give the privilege with Gainsbourg's songs to Elmosnino here? It could be argued that Sfar glosses over the most interesting parts of Gainsbourg's life, whilst never quite portraying the obnoxious shit that Gainsbourg could be. Yet, despite all this, Gainsbourg has much to like about it. Mainly the performances are good, the look of the movie exquisite and the film has a certain swing which makes it entertaining. Still, Gainsbourg feels like an opportunity missed.

Astrid:
Serge Gainsbourg has been one of this household's demi-gods for years now. His holy position entails high expectations towards anything Serge related, even this movie. We could not go and see it in the cinema in Finland, because of the subtitle problem for the English speaking, so we had to wait until now.
I loved the first half of the movie. The description of Serge growing up and finding his talent was eloquently and freely made. The film employed puppetry to visualize an internal development. The movie dared to stretch the heavy demands often made on biopics to be faithful to a Reported Reality.

Unfortunately, the second half of the film dealt with the most iconic things known about Gainsbourg and as if chained by the well known names and events, the movie became stiffer and less imaginative as a result. The amazing women (Bardot and Birkin) and the descent into alcoholism and illness were presented more out of duty rather than out of inspiration. The actors playing these people were very beautiful and even managed to look a little like BB, Birkin and Serge in their day, but still, what was the point of even trying to recreate these iconic looks? Or what was the use of cramming a whole person's life story into one film, rather than making an artistically valid and whole piece of cinema?

Gainsbourg: A Heroic Life ended up suffering from many of the usual biopic problems. The thought of a real living person's life and death can become (and often do) a way too restricting approach to cinema. The question of what is Real being an impossible and boring one to answer anyhow. That is why I celebrate the first half's inventiveness and hope to see more of this in films about celebrated people in the future. Also, if I want to look at the iconic images of Serge and Jane, I can refer to the documentaries and image sources, a film should never try to compete with those because it cannot.
at 6:15 PM