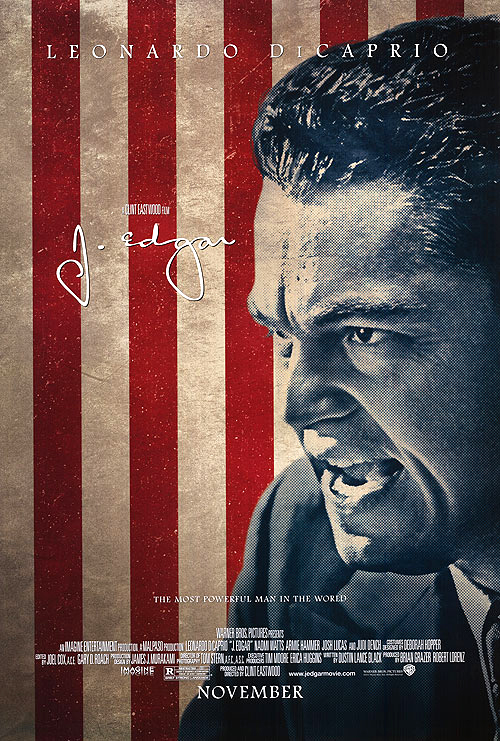 Astrid:Surprisingly, the problem with going to cinema when you are nine months pregnant is not that you need to pee or that your back is aching too much, but that the 50-something couple next to you stinks of booze, sweat (the onion variation) and old-perfume-gone-bad. They also ate something smelly during the film that came from a noise making package and caused additional burping. I breathed through my mouth for nearly three hours and somehow managed to enjoy J. Edgar most of the time.

In many ways J. Edgar was a boring film with too much crammed in the nearly three hours. It was an attempt to really picture the life of a completely unsympathetic real historical person. The question remains, why do we have to keep thinking about this man? Why especially, do we need to try to understand him? There were other more interesting perspectives in the film though and they elevated the film to a high artistic level. First of all the movie looked refined and classic, Clint Eastwood's directing was reliable and his actors excellent. There was an easiness while at the same time the film oozed class rarely visible in cinema these days. So what if it was old-fashioned – cinema usually looks better that way.

Without making J. Edgar's sexual orientation the focus of the movie, the film's emotional core was the love relationship which Hoover (played by Leonardo Dicaprio) had for decades with his loyal assistant Clyde Tolson (played by Armie Hammer). Eastwood has become a master of making sentimental and touching films without over-playing the emotions. It's an admirable skill. Here the best scenes are the ones depicting how deep and real Edgar's love for Clyde was and what a personal tragedy it was for him that his relationship needed to remain secret and somewhat unrealized. For some reason the Finnish cinema audience often laughed when the gay references became explicit. I have no idea what was funny there. To the credit of the smelly lady next to me, at the end of the film she was in tears. Love is love and I'm glad that our loyal republican Clint E. is not afraid to make that statement one more time. Still, the poor closeted J. Edgar came up with a load of scary and hateful practices and there is very little reason to feel much for him in the end.


Nick:
It was trying sitting through J. Edgar at the cinema. Not only is the film wordy and slow paced, being flanked either side by noisy middle-aged alcoholics was an endurance test that did undermine my enjoyment of the picture somewhat. I think the premise of Eastwood's latest picture and its inherent interest to anybody hangs on how fascinating you find the life of J. Edgar Hoover. The bad-boy of recent American history has a poor reputation and no real legacy. Could the liberal-republican Eastwood be the perfect director to tell his story? As with Howard Hughes (recently tackled by Martin Scorsese and also portrayed by Leonardo DiCaprio), so much mythology surrounds Hoover, distinguishing fact from fiction will always be hard.

For the first two hours of J. Edgar,  Eastwood concentrates on Hoover's recollections of his rise to the head of the FBI. The movie is narrated in flashback, Hoover addresses various secret service agents in the 1960's. We hear of Hoover's fight against communism (his obsession), his involvement in the Lindbergh kidnapping in the 1930's, his fight against organized crime, his various meetings with the 8 US presidents he served under. We get the prescription drug addiction Hoover got in later life, the secret gay life and the mother (Judy Dench) who molded his insecurities and his obsessions. DiCaprio is again, amazing in an unflattering role. Naomi Watts on the other hand feels wasted as Hoover's loyal secretary Helen Gandy. Armie Hammer is exceptional as Hoover's right hand man in the FBI and life- long lover Clyde Tolson. Gradually, J. Edgar moves from being a picture about a man who collects secrets on others to a picture of a man who guards his own secrets and reputation.

And although it takes awhile, it's worth hanging around for the last half an hour when the picture moves up a gear. Eastwood's gift to Hoover is to humanize him enough so that we feel sympathy for him when his mother dies. Eastwood from then on brings an emotional heft to the picture when it becomes a gay romance, focusing increasingly on the secret relationship between Hoover and Tolson. In essence J. Edgar becomes a Federal Bureau version of Brokeback Mountain. And here lies the problem with J.Edgar. It's a credit to the picture that I felt that emotional thrust at the climax (ahem!), but J.Edgar would have benefited greatly from being a fully fledged love story and leaving Hoover's public (secret) history on the back burner. A good, engrossing movie, but not a great one.
at 2:43 PM