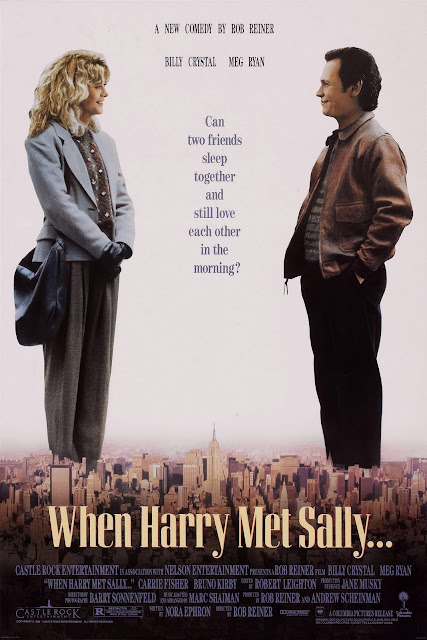 Nick:
Woody Allen's post-Mia Farrow reputation as filmmaker has undoubtedly suffered from the 'scandal' induced by Woody shacking up with Mia's adopted daughter Soon-Yi Previn. Each new Woody picture is greeted with accusations of "not as good as his earlier films" and with the added comment that Woody is obsessed with younger women. It's a constant slur carried out by the critical community and the public alike. I think Allen's pictures have remained pretty consistent in reality. Ironically, a director such as Roman Polanski has managed to avoid such a critical backlash despite being on the run since 1974 after being convicted of having non-consenting sex with a minor. Why the double standards? One could argue that Polanski's last great movie was Chinatown. I only mention this because When Harry Met Sally... is undoubtedly a homage to the kind of romantic comedy that Allen made his name with. It comes from a time when it was OK to make an Allen type picture.

But Reiner's film, although following a Annie Hall type of structure, sweetens the pill considerably. And of course, as is not so often the case, the Allen character in this movie (Billy Chrystal's Harry) gets the girl. When Harry Met Sally... has entered the annals of classic nowadays. It's a picture that has its not so subtle laughs for sure, but there is no edge here, no real examination of the difference between the sexes, which is the flimsy premise of the picture. Plot lines are predictable and the obvious denouement is soaked in sentimentality.

Performances are adequate, with Meg Ryan cementing her reputation of the cute but dim American girl next door in her role of Sally. Crystal is the typical wisecracking smart arse I've grown despise. There's not so much more to say about this film. Reiner's direction and shooting style is that of the undoubted journeyman director he has become. When Harry Met Sally...  is the kind of film I'll watch on those rare moments when I want my cinema to place no demands on my imagination. If I'm feeling sickly sentimental, I know what to stick on and wallow in the shallow, smart arse, insufferable romance of this pleased with itself picture. If there is a reason to castigate Allen, perhaps it's for inspiring such woeful cinema.

Astrid:
For me When Harry Met Sally is like a super violent action film for Nick. It is necessary sometimes, once a year or so. I am not going to make claims for the artistic greatness, mastery of cinematic devices, the look or acting even. I know, it's not a fantastic movie, but I'll give you my three reasons for the necessity of repetition.

1. Belief in romantic love. While pretending to criticize and question the necessity and logic of heterosexual romantic love (as known since the 19th Century) the movie subscribes to the notion. And so do we, although we are usually too scared and cynical to admit to it (or else already married). While I am offended by the film's insistence that hetero men and women cannot be friends together (because of sexual attraction), I am as happy as everybody else when Sally and Harry finally become an item.


2. A lot of talking. I like films with dense talk-filled scripts where two people are just talking to each other all the time. I like cerebral romance, living in my head and endlessly procrastinating over possibilities. That's when I can relax and pull the blanket over me. This is not Woody Allen writing though. I know it is trying to be but doesn't quite reach his level. Yet, there is a Meg Ryan variety of the dry 1990s romance and I grew up on it, I kind of thought that's life!

3. Underachievement. Experiencing and living life a little below the bar some of the time is good for me. It makes good better. Watching films can get tiring if they are always critically highly rated and excellently realized in every aspect. When Harry Met Sally offers me a safe moment of underachievement and that can be inspiring in a reversed manner.
at 8:03 AM