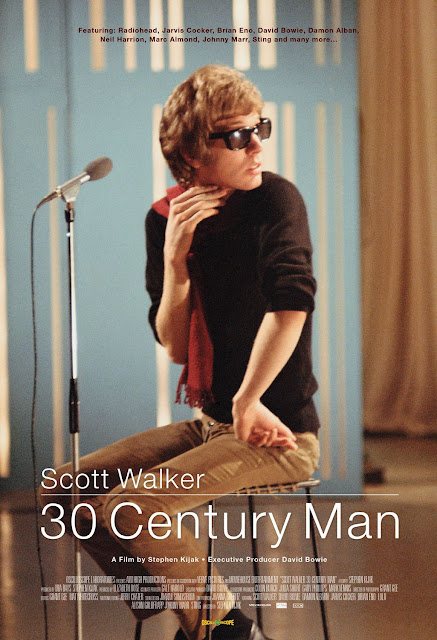 Astrid:
Being a parent to a very small baby means that all sense of being cool (if I ever did feel it) has evaporated and been replaced with a clumsiness comparable with my early teen years. Everything's new and uncertainty is the new state of being. No, I never did feel cool in the way that Scott Walker defines the word. He visits our home often through his music and now, for the second time, through this documentary. Scott is not beautiful – he just knows how to carry his clothes and what to leave out in his sentences.

And he leaves almost everything out. There's the mystery and the allure. He walks away from himself and away and away someplace else...that's a great feature in an artist – fearlessness of the mind, the love of change. But watching the documentary I cannot help but be amazed at his slightness. Scott just doesn't care. He hates hearing his past compositions. He doesn't appreciate any of the great work he did early in his career. He doesn't rate Scott 3 or Scott 4. He is much more content slapping pig carcasses in the studio recording greatly disturbing Avant-garde music in the 2000s. He takes his time and leaves his gaps.

This all seems amazing and strangely appealing to me right now. Now that I have a child of my own, now that I've made the classic feminine choice to combine art and life (as Sylvia Plath would have described it), I can look at the choices of Scott and admire him for them. Loneliness and isolation, devotion to a cruel muse, drink and drum...and always the cap (he hides his eyes from view most of the time), as if he is entirely uncomfortable still.
I'm glad he did it all and made the music most of all. Oh, did I mention his voice? I'm in love with it.

Nick :
I was one of those people. The ones described briefly in this documentary. I was a serious follower of anything Zoo related in the early 1980's. The Teardrop Explodes, Wah Heat!, Echo & The Bunnymen, The Wild Swans....Martin Atkins record sleeves, Bill Drummond. In some ways the Zoo label imprint was Liverpool's answer to the Manchester based Factory Records, and a for a few years was as genuinely groundbreaking. So, at the height of Teardrop Explodes fame and listening to moments of their second album Wilder (which contained Walker like moments), Teardrop's leader Julian H Cope announces that Zoo will release a Scott Walker compilation compiled by Cope himself. I ran to the shop! Fire Escape In The Sky: The Godlike Genius of Scott Walker came in a grey card sleeve with green Typeface by Atkins. It was sumptuous and mysterious. I was 15 years old. This record was a life changer for me. It still is as vital to my existence some 30 odd years later.

So, let's set the record straight: Scott Walker is my favorite ARTIST ever, period, done and dusted. No messing. 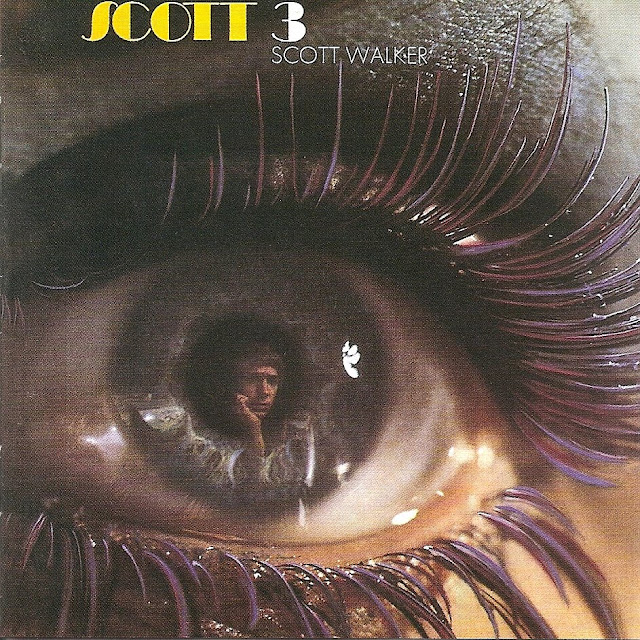 Kijak's documentary was on Finnish TV the other night and it was interesting to see people excited to watch it judging by the reaction to its screening on Facebook. So, we decided to delve back into Scott Walker: 30 Century Man; this was my fourth viewing. The main thing going for Kijak's film is Scott Walker himself, the access to his working methods and Scott opening up about his life. So what we get is a frank Scott talking about his early 1960's pop stardom as one of The Walker Brothers. A reluctant Scott offering precious little insight about his solo albums Scott 1 through to 4 (the reputation building records). Walker dispelling myths of the later years in a sober serious way.  And we get a lot about his recent albums (especially with a  focus on the 2006 masterwork The Drift). What works in this documentary is the sense of continuation between his 1960's albums and the recent, more challenging records such as Tilt and The Drift. It's obvious to me that Walker is just continuing his own unique vision, something this film portrays well. I could've done with more Scott talking about his life.

What we do get is the usual litany of talking heads reciting their own Scott experiences. David Bowie, Brian Eno, a worthwhile Jarvis Cocker and a crazy Alison Goldfrap. Lets not even mention the super nerdy Radiohead or the offensive STING (for fuck's sake!!!) Embarrassment overload comes with said musos listening to Walker's music and trying to convey some personal connection with it. This was pointless, we don't need these people's views to justify Walker's excellence. Still, due notice was given to The Electrician, a key Walker track. I'd have liked some acknowledgment of the underrated and ignored 'Til The Band Comes In album (the great follow up to Scott 4). Also some insight from Eno to the album he apparently made with Walker in the 1980's that was never released. Eno has gone on record saying it was some of the greatest music he'd ever heard, only for Walker to then refuse to finish the record. Is this true? Does it exist anywhere? Still, Scott Walker: 30 Century Man is essential viewing for fans like me. For the neutral it's an above average portrait of someone who in my world is God-like. Search out the records. NOW!
at 6:14 PM