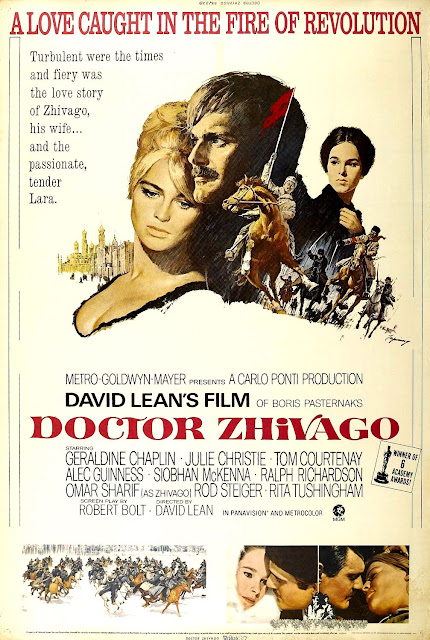 It's often the case that through the critical community, too much emphasis is placed on the script when discussing cinema. It's an odd thing to say, but cinema is a visual medium first of all (and its origins certainly attain to this with the silent era). It could be argued that in its purest form, that after the visuals, music even trumps the words in the emotive power of cinema. This may explain to us why the action blockbuster picture actually remains closer to the origins of the form than say a wordy art house drama. The introduction here is as a warning to tell you that if you enter into Doctor Zhivago for an intellectual/intelligent explanation  of what happened in The Russian Revolution, you may be disappointed.
Doctor Zhivago in many ways finds a film which offers its political attitude through the voices of a bunch of English luvvie actors. Pretending to be Russian, spouting in the best Queen's English, many a British thespian can be viewed espousing the most basic clichés about Russia and its bleeding Revolution. Yes, hard facts or even any correct information on the events at hand is not why I would recommend Doctor Zhivago. Julie Christie, captured by Lean in her prime is one reason to watch – she looks amazing here, Omar Sharif, doing so much for the cause of the mustache is another. Instantly, Lean, by giving us such a gorgeous looking pair, takes us into the world of idealized fantasy. One can just marvel at shot after shot of beauty on screen, littered with little details that keep the continuity of the story going. The lost, gained and lost romance of the banned poet Yuri Zhivago and his muse Lara engages us, even if one does not actually care that much for what comes out of their mouths.
So Lean, almost more than any other director, and certainly in the second half of his career, understood the visual power of the medium better than most. He had been a great director of actors but seemed to have loosened his grip somewhat for Doctor Zhivago. The only American on view – Rod Steiger, as the surviving scoundrel Komarovsky delivers any sense of reality amongst the decadent camera work. But more importantly, Lean makes his romance credible, or our wanting for it to succeed, by keeping the central lovers apart for most of what is a lengthy picture. Doctor Zhivago has no real sense of sentimentality, which serves it well, especially with its cruel ending. So as cinema nowadays becomes more based on trying to convey real emotions (why?) or using CGI to recreate the ultimate unimagined world, I'll always fall back on the artistry and genius of David Lean. Lean knew how to tell a "jolly good" yarn in the most eye catching way. Some of the primal essence of cinema throbs here.

Astrid:
I'm not a lover of David Lean epics as such. Too many men, too many wars. Doctor Zhivago is an important exception though, because I do love it. I feel as if admitting this love requires proper explaining. There is a guilty pleasure feeling that creeps in with this film – the lightness of the political content, the general fluffiness, the romance of a lifetime – nothing really stands the inspection of a critical mind. Yet, the story of Zhivago and Lara appeals to me time and time again.

A big reason for why Doctor Zhivago works is the look of the film from the way it has been filmed to the way it has been designed to look using sets, props and clothing. The movie makes everything from poverty to abundance and from torture to sexual desire look romantic in the early 20th century Russia. Also, the fact that the film was made in 1965 influences the look positively, especially in the case of Julie Christie.

It baffles me how I can find it romantic that Zhivago is married to a nice beautiful poetry-loving lady, but still yearns after and has an affair with Lara. He wants to keep both women obviously and manages to juggle between them until he is highjacked by the red army. Then he returns a half-dead man into the arms of Lara to find out that he has been left by his wife. In the end he loses both brunette and blondie – I guess that's the romance: love is romantic if it's lost and unromantic and mundane when it becomes a lasting thing with routines. What I really cannot grasp is why and when did Zhivago become such a patriot that he chose Russia over any ladies at all.
at 2:26 PM