Planet Of The Apes (1968) Directed By Franklin J. Schaffner 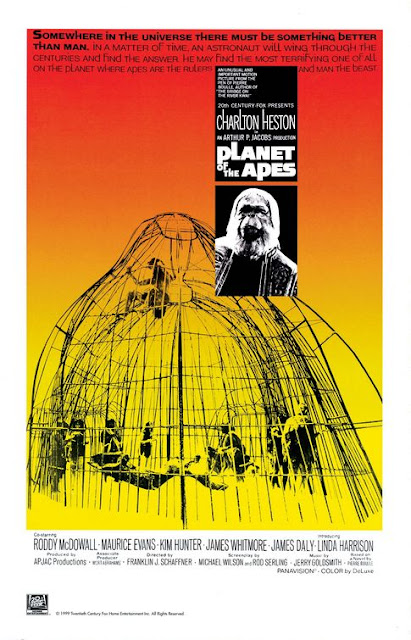 Astrid:
During the titles Nick had already made a few comments: "Great titles!" he said, and then "we never watch enough 60s films". I said nothing. I was making an effort to be nice and agreed therefore to watch Planet of the Apes although I knew I was in for something equally as annoying as it would be entertaining. I could have remarked that the reason we cannot watch too many movies from the 1960s is because the period in cinema is unreliable (you get a lot of daring invention but you get unimaginative conformist and naive stories too)...While I can embrace some of the stylish, groovy and funny 60s, I hate James Bond and to me it signifies the period. Anyway, I continued to say nothing when Nick predicted that I would like Planet of the Apes.

He was talking in a hopeful voice with a tiny amount of force in it (just in case that would do the trick of persuading me to fall in love with Chalton Heston). The film began and Nick declared with child-like excitement: "the spacecraft is sinking!" and "wow, that must be the Grand Canyon". Indeed, I thought, but how stupid is this film when it expects us to believe that these 700-year-old astronauts would not recognize the Grand Canyon when they land in the middle of one of the biggest landmarks in the US, their original home? That question proved to be frustratingly poignant throughout the film. It felt as if the makers were undermining both the audience in front of the silver screen and the characters in the film. In 2011 it felt a little too simple to just reverse the roles between humans and apes (or other mammals) and then stop imagining anything further. It would a be a great script if it had been written by a 10-year-old, but it wasn't.

Nick remained enthusiastic until the end. I could see he was watching the film with the childhood self who first saw the film decades ago. He did not suffer and intellectualize, he did not laugh at but with the film. He got the almost environmentalist message at the end of the movie and it still could make an impact after all these years. I watched Chalton Heston ride away in his Tarzanesque outfit with his own non-verbal sexy Jane in tow. Yes, I got it  – Adam and Eve all over again. Past and present meeting in a circle where it no longer matters what is the future because it's all the same evolutionary repetition in the end. And then there was the final scene of the film with the Statue of Liberty. Nick loved it  because it was "iconic" – sometimes I wish I were a little boy, sometimes I wish I was in the target audience for something other than Sex and the City I and II.

Nick:
A strange symmetry, web of conceit or pure coincidence seems to tie together the movies we have reviewed this month. Edward Scissorhands features Johnny Depp playing a character who is in part based on The Cure's Robert Smith. This year at Cannes premiered a new movie called This Must Be The Place starring Sean Penn, where his character is a Robert Smith-like retired rock star looking for his father's killer (!!!!).  James Franco co-starred with Penn in Milk, and this year Franco starred in a kind of sequel to Planet Of the Apes called Rise Of the Planet Of The Apes. Confused? Well, lets just add that Scissorhands helmer Tim Burton directed a famously pointless remake of Planet Of The Apes in 2001. This really doesn't represent anything other than the small circles and lack of original material knocking around Hollywood. Planet Of the Apes, the original from 1968 is still the definitive chapter of the series that warrants revisiting (at least in my opinion).

Planet Of The Apes not only spawned sequels and remakes but also a TV series in the 1970's which I was a big fan of when I was a kid. I had the badges and knew friends who were members of the series fanclub. I always loved the reverse concept of Planet of The Apes, that the human species have created their own destruction, only for the Apes to rise and become the dominant species on a future earth. Man cannot talk and is in fact closer to our present understanding of the primate. Planet Of The Apes deals with this concept, yet also manages to mix in an oppressor influenced by Nazism, a commentary on the outsider in society, the issue of race and man's headlong race to destroy the planet (environmentalism). This is perhaps why Planet Of the Apes has endured so long, under disguise it tackles so much that is still relevant to our current state.

Schaffner manages to create an amazing looking backdrop for the 'new planet' with the early scenes shot in Glen Canyon, Utah, these being the most impressive of the picture. Charlton Heston as our cynical hero spends most of the picture in states of undress (he was 45!), yet offers us a stern authority as future spaceman Taylor. Stand out performances come from Kim Hunter and Roddy Mcdowall as the intellectual scientists who fight for Taylor's cause of actually being an intelligent human being. Special mention must go to the ape make-up, which still looks convincing after all these years. So, what Planet Of the Apes actually states are quasi-liberal ideologies, a warning to man of what might happen. The final scene of Taylor's ultimate discovery has become one of the most iconic images in modern cinema history. It's enough alone to preserve Planet Of the Apes standing as a classic.
at 6:26 PM