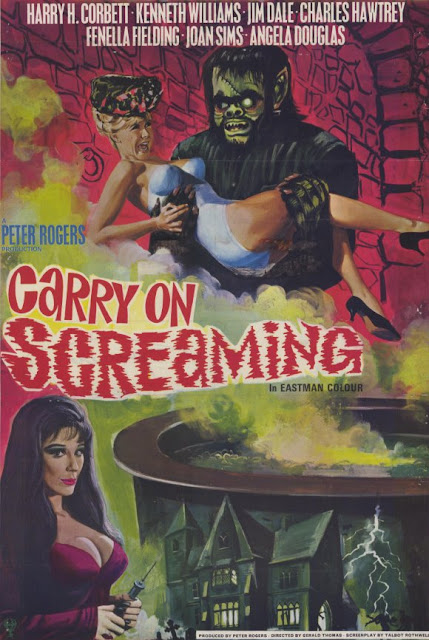 Nick :
Some things are culturally relevant to me yet don't seem to translate into other cultures/countries. I've tried to convince Astrid of the qualities of the Carry On Series. I dont think she's quite grasped the importance  these films hold for me. Actually, I've not met any Finns who have any real experience with these most highly valued of films. Bar the odd The Smiths best of album cover, most people outside of Britain probably don't know the legendary cast of these films. When I watch a Carry On one does want to burst into song..."take me back to dear old Blighty"


There are no comic heroes as great as Kenneth Williams, Charles Hawtrey, Sid James, Kenneth Connor, Peter Butterworth, Hattie Jacques, Bernard Bresslaw, Joan Sims, Barbara Windsor and Jim Dale of the regular Carry On stars. These actors are faces I grew up with. Everyone in Britain knew these people. You can forget your Charlie Chaplin and your Buster Keaton or Steve Martin or your Woody Allen.  This is comedy gold from a different level of laughter. Carry On Screaming brings us  the usual camp play and sexual innuendo whilst spoofing the Hammer Horror films. It has Harry H Corbett in the lead role (his only Carry On) and often has him "copping an earful from 'er indoors." - played by the ever reliable Joan Sims.

Regulars Williams and Butterworth feature strongly as well as a great cameo in a public toilet from Charles Hawtrey. Carry On Screaming is by no means my favorite Carry On, but it's still very much better than nearly any picture ever made in the history of film. Only the other Carry Ons are comparable. Good enough reason to watch? Here's another: My mate Mr Greeves loves these films and that's good enough for me, it should be for you too.


Astrid:
A long time ago I watched Carry On Screaming! with Nick on VCR – back when we had a telly and all that (it was a very short-lived time, especially with the VCR). As it was a long time ago, I was young, easily bored, and possessed even less of a sense of humour than now...so I felt offended by the film.
Then for a longish period of time we had a DVD version of the same film on our shelf (a gift from a friend). I refused to watch the movie based on my memory from last time, so there it sat in its wrapping.

Sometimes Nick manages to be a sneaky behind-the-scenes-organizer...the other day he surprised me by having promised his daughter that we can all watch Carry On Screaming! together! Apparently the dirty jokes would be lost on her, so it would appear as an innocent slap-stick comedy in her eyes. Indeed she was entertained, but to my great surprise: so was I.

Yes, it is a naughty little comedy that pokes fun at old story telling traditions (in this case the Gothic genre), other movies, gender stereotypes and so on. The film is also distinctly English and clearly a child of the 1960s. It reminded me of What's New Pussycat, and the James  Bond movie Casino Royal (1967) which both introduce the young Woody Allen to cinema.
Maybe it is due to my current tiredness that my taste in films is more light and comical than usually. We have started to watch Matrix, but I'm not sure I can make it through...it's so gray, depressing in its bleakness and takes itself so seriously.
at 2:26 PM