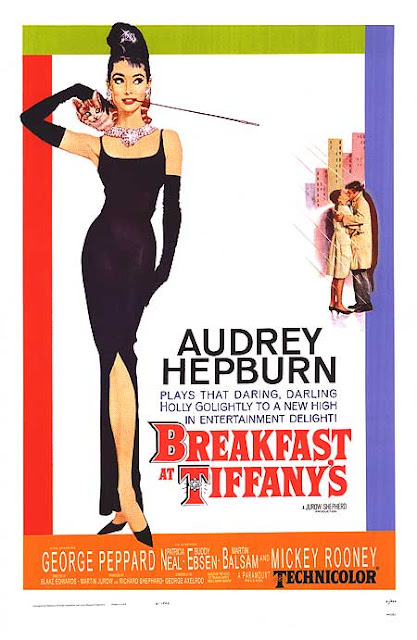 Nick:
Deep Blue Something had a hit with one of the worst songs ever, which of course referenced this film. Some witty fuck somewhere will try to re-evaluate the song and say it's a classic of the time and has only improved with age. Or someone else will say it's a guilty pleasure with a memorable chorus. But in reality, to some of us, Deep Blue Something and the film it references are the enemy. Breakfast At Tiffany's is nowadays regarded as a classic and almost a by-word for some kind of feminine cool.

The general consensus is that this is Audrey Hepburn's moment. Blake Edwards, if it were not for Peter Sellers, would mainly be remembered for being married to the excellent Julie Andrews. His Pink Panther films were reliant on Sellers and little else. His direction on Breakfast At Tiffany's is embarrassing. This is such a mess, Edwards often mistaking wacky for radical. In his heart of hearts, Truman Capote must have been on the rooftops singing "What have they done to my book Mummy?" – but then watched the fame and the bucks roll in.

Capote recovered to write his In Cold Blood and then fell off the trail. Hepburn would be iconized with this movie. Yes, she is the anorexic waif where every outfit looks splendid darling... and Moon River sung by Hepburn is a brief highlight in a swirl of conservative diarrhea. But really, someone needs to question why this movie is rated at all. Hepburn is just to clean for this role, one cries out for a dirty Jane Russell, Cyd Charisse or Marilyn Monroe. Yes, one cries out for hard filthy sex! Overrated garbage where the pussy (cat) steals the acting honors.

Astrid:
I had never seen Breakfast At Tiffany's until yesterday. It had cropped up in conversations sometimes in ways that made me realize there was a hole in my education right there. How embarrassing. I think I was aware of this lack of knowledge and experience by the age of 11, so it took a relatively long time for me to catch up with the rest of the civilization. Too bad then that I thought the film was fluffy, pretty awful and racist. I had high expectations – at least I thought I'd be entertained – but I was mostly bored.

First of all: I'm not a fan of Audrey Hepburn. I think there are two kinds of women around, those who root for Marilyn and those who root for Audrey. It doesn't take much to guess whose side I'm on. It infuriated me even further to hear that her role had been planned originally for Monroe, but then somehow Hepburn got it. A starvation victim attempting to be funny and a loose hooker type just didn't convince me. Ok, her face is quite amazing, but there is nothing but force in her performance. She is desperately trying to convince everyone. Where's the sensuality? How are we supposed to believe that she has been having sex with all these middle-aged men?

Well, there are some enjoyable things in Breakfast at Tiffany's too. For example the Givenchy outfits are a feast, and it is fun to realize how much a certain Carrie Bradshaw character was modeled after Holly Golightly. Holly's nameless ginger cat with his bad temper is maybe the best character in the whole movie and the theme song Moon River is better than anything else in the film. Had I seen this film at the age of 11, I might have connected in a whole different manner.
at 2:27 PM