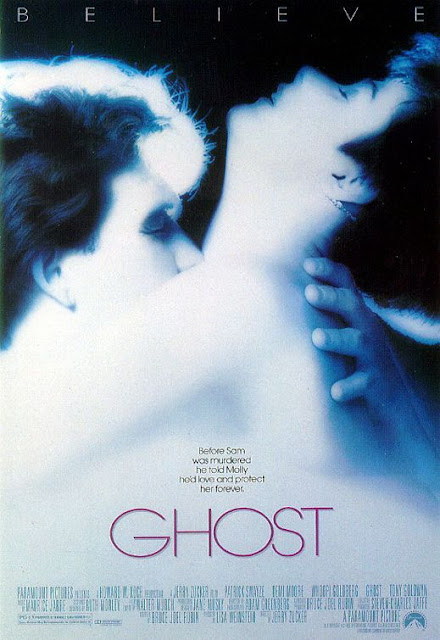 Nick:
What can one say? Sometimes the choices we make we have to pay for somewhere down the road. So, I'm fully expecting a bolt of lightning to strike me down for having to make Astrid sit through Ghost. It's deserved. What did anyone see in Patrik Swayze? I dont mean to talk ill of the dead, but shit, what a poor film repertoire this guy has. He was the hunk with not much going on upstairs. We need a piece of American Pie – let's cast Patrik! There were moments of course. He was in The Outsiders and the ludicrously enjoyable Point Break. The sleaze merchant in Donnie Darko shows a talent wasted. But then, his big ones, Ghost and Dirty Dancing. Lowest common denominator stuff, although people have loved these films.

1990 could be a watershed year for when American mainstream cinema really lost it. Only Home Alone was bigger than Ghost. The roll call of top grossing pictures that year is incredible (for all the wrong reasons): Pretty Woman, Kindergarten Cop, Days Of Thunder, 3 Men & A Little Lady, Look Who's Talking Too, Problem Child and so on. You could also have caught the OK Dances With Wolves and the brilliant Goodfellas and Edward Scissorhands, but these were exceptions. I had successfully erased Ghost  from my memory, now I have to start again – it may take years...

Lets suspend our imaginations for a moment (it's obvious the film makers did!). The main premise of Ghost that Swayze's murdered executive banker Sam, has to stay on earth as a ghost and not follow the light so he can show his undying love for his partner (Demi Moore's arty type Molly) does not bear scrutiny. There is no chemistry between these supposed love birds.Throw in the most predictable plot, cliched script, some made for TV direction and acting, some quasi-Christian moralizing, casual racist/sexist sentiment, the worst special effects ever...and what are we left with? Some would say all round family entertainment. Ghost in 2012 veers towards the offensive in how it patronizes the audience. Even the one genuine interesting moment of this feeble film (it could have been a queer-core classic scene) when medium Whoopi Goldberg's body is being used as a conduit by Sam to make love to his lover one last time, is denied us. Once the moment arrives we only see Sam's ghost body canoodling with Molly. This is all round pathetic cinema.

Astrid:
Ghost is right up there with the worst movies I've ever seen. It's a film that insults and undermines its audience on many levels. It's homophobic, racist, boring, has bad CGI (if it even is that), bad writing, it shoves in your face Christian views on afterlife (heaven/hell split) and also represents the end of the 1980s at its worst. I thought I had never seen the film at all, but upon watching remembered that I once stayed in a  dubious and weed smelling hotel in Minneapolis where one morning I caught ten minutes of this classic.

Yes, apparently Ghost was a smash hit romantic and exciting film when it came out in 1990! But then, so was The Bodyguard (which was a favorite of mine when I was less than 10). I used to win dance competitions while Whitney Houston played in the background as a second grader, so I would have probably loved Ghost had I seen it at the time. Now was definitely too late. I almost never get to watch anything, so when I finally get around to a movie, it is disappointing to waste my time on something so pathetic.

Whoopi Goldberg is funny and beautiful. She definitely represents something important to me as she was always in the films I saw in the 1990s (hah!) At some point of my not-so-well-informed-youth I also learned that Whoopi was lesbian (and that Tracy Chapman was not a man). Therefore I really thought Demi and Whoopi should have ended up together in this boring story. What's more, they kind of had something going because the ghost guy borrowed Whoopi's body and caressed Demi with her (Whoopi's) hands (while they waited for the murderer to arrive). This was going to be the most explosive insight in this film, but then it turned out to be the biggest insult: Whoopi was replaced by the ghost-actor guy for us hetero normative audiences. So wrong. I'm not going to bother to find out who played the ghost, because he was so lame and so average. I'm sure everyone else knows who I'm talking about.
One last complaint: why would a sculptor hipster fall in love with a boring banker, who says 'ditto' instead of 'I love you'?
at 10:22 PM